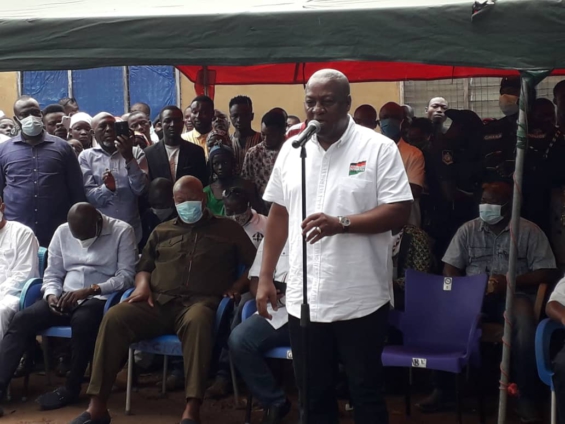 Flagbearer of the opposition National Democratic Congress (NDC) John Mahama says his party will use legal methods to ‘frustrate’ the implementation of the Agyapa Minerals Royalties agreement.

Addressing the chiefs and people of Kaleo as part of his tour of the Upper West Region, he said there are a lot of questions surrounding the Agyapa deal due to lack of transparency by government.

“Therefore, until government include relevant stakeholders and come to a consensus on how the Agyapa Minerals Royalty Limited needs to be managed, the NDC party will adopt all lawful means to prevent the deal from being implemented,” he said.

“My advice to President Akufo-Addo is that he should desist from signing that Agyapa deal immediately because as we have said, we are going to oppose it and we will do everything legitimately in our power to frustrate that agreement in the interest of the people of Ghana,” the former President said.

He added, “They should bring that agreement back hold a meeting with the Civil Society Organisations (CSOs), chiefs and all the stakeholders to whom that gold royalty belong and let there be a consensus on how we want to monetize our gold royalties,” he stated.

Former President Mahama further reiterated his stand that, should he win the 2020 general election his government will not respect the deal.

Mr Mahama further added that the attempt by the Akufo-Addo government to justify the Agyapa deal in the name of the 2011 proposed Ghana Gold Company is both inaccurate and disingenuous.

According to him, the proposed company was 100 per cent owned by the government and people of Ghana hence, it had no secret beneficial owners.

“A small group of people cannot go and write an agreement and monitise our gold royalties for the next 15 years and even in perpetuity without our consent. There must be a consensus before our royalties are monitised,” he stressed.

DISCLAIMER: The Views, Comments, Opinions, Contributions and Statements made by Readers and Contributors on this platform do not necessarily represent the views or policy of Multimedia Group Limited.
Tags:
Agyapa Mineral Agreement
John Mahama