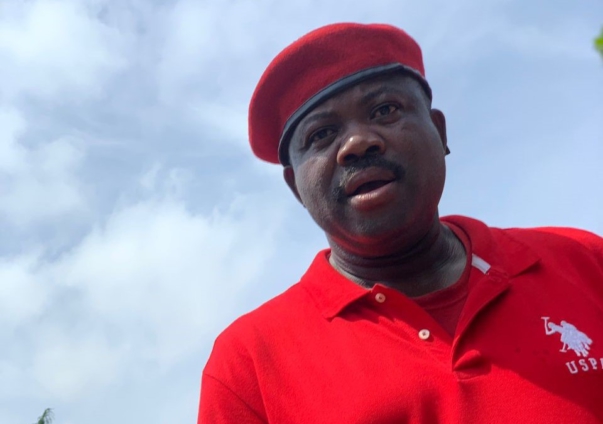 The National Organiser of the National Democratic Congress (NDC), Joshua Hamidu Akamba, has been spotted with a weapon among a crowd of Arise Ghana demonstrators.

It comes few minutes after another protestor was arrested for carrying a pistol at the El-Wak stadium, where they had converged for day two of their demonstration.

According to a public notice by the Ghana Police Service, Mr Akamba was advised to put the weapon away after his attention was drawn to the illegality associated with such act.

Demonstrator Spotted with Weapon at El-Wak

The Police have spotted a demonstrator, Joshua Akamba with a weapon among the crowd of demonstrators gathered around the El-WakStadium, today, 29th June, 2022. pic.twitter.com/QTCgGl5T5u

“He was also urged to notify other demonstrators to desist from carrying offensive weapons during the demonstration,” the police said.

Joshua Akamba later told protestors with firearm to surrender their weapons “because we need our people to be safe.”

The Police have uncovered that some of the demonstrators are acquiring catapults to use during the protest.

Police Warn Demonstrators Against Planned Use of Catapult

Police intelligence indicates that some demonstrators are going around acquiring catapults with the intention of using them during the demonstration.

It has described the act as unalwful, saying individuals who are planning to cause chaos must desist from such acts.

“The police will take all necessary, professionally-driven measures to enforce the law and protect life and property.”

Twenty-nine persons were earlier arrested in connection with Tuesday’s demonstration by Arise Ghana.

The protest which turned chaotic saw police and protestors exchanging stones and teargas during a standoff in the afternoon.

The group insisted that the state-security agency was being used as a means to foil their attempt to voice their concerns against the Akufo-Addo-led administration.

“Available video footages of the event are being reviewed and all other persons identified for taking part in the attacks as well as inciting the violence will be arrested and brought to face justice,” a police statement added.