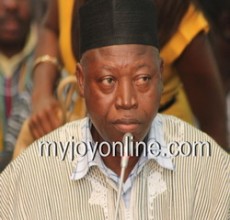 With the theme "Socio-economic Transformation", the workshop was to present the National Medium-Term Development Policy Framework (NMTDFP)  to succeed the Ghana Shared Growth Development Agenda (GSGDA2010  – 2013) as mandated by 1992 constitution.

Before delivering his keynote address Upper West Regional Minister, Bede Ziedeng led participants to observe a minute silence for the late P.V Obeng who passed away last week and Cpt. Patrick Donkor, another departed staff of the NDPC.

Mr. Ziedeng commended the NDPC for initiating the orientation workshop but was quick to add that ‘‘for us in the Upper West region it would have benefited us more if it had been organized a little earlier since our districts are almost at the tail end of completing their MTDP's".

Deputy Director in charge of Plan Coordination for NDPC, Adjei-Fosu Kwaku maintained that the primary aim of the workshop was "to ensure that the agenda for 2014 – 2017 is really translated on the ground to benefit the ordinary man".

According to him the workshop provided opportunity  for the sharing of ideas while presenting a new framework on transforming Ghana's economy and how to put in place some key development issues in ensuring sustainable development.

The ongoing nationwide orientation is the 5th in a series of using Planning Guidelines issued by the NDPC since 1996 for the preparation of District Medium Term Development Plans.