Nduom gets 5 minutes with EC boss but… 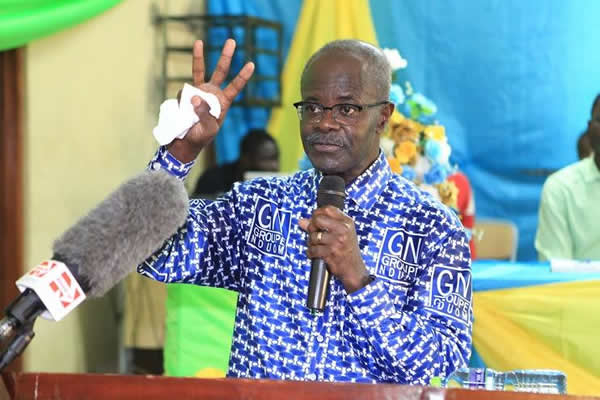 The flagbearer of the Progressive People's Party has been granted his wish for a five minute discussion with the Chair of the EC in the hope of overturning his heartbreaking disqualification from the 2016 elections.

It is not clear yet if Dr Papa Kwesi Nduom made any headway after the meeting.

What is clear though, is that the Electoral Commission has brought the nomination process for presidential candidates to an end despite the threat of court action by the disqualified presidential aspirants.

Director of Communications at the EC, Eric Dzakpasu confirmed the five minutes meeting Mrs Charlotte Osei had with the embattled presidential aspirant but will not disclose the outcome of the meeting.

What he disclosed however is the end of the nomination process and the plan by the EC to conduct ballots for the four remaining candidates cleared to contest in the December 2016 elections.

The ballot will determine where each of the candidate, John Mahama of the National Democratic Congress, Nana Addo Danquah Akufo-Addo of the New Patriotic Party, Ivor Greenstreet of the Convention People's Party and an independent candidate, Jacob Osei Yeboah [JOY] will be placed on the ballot paper.

A total of 13 aspirants were disqualified from contesting the upcoming election for acts of fraud, negligence, or a combination of both.

Some of the parties have denied any wrong doing and are seeking a last gasp attention from the EC or an intervention by the courts to get them back on to the ballot.

The EC spokesperson confirmed receiving petitions from other aggrieved parties including that of the NDP, the party led by Nana Konadu Agyemang Rawlings, the aspirant disqualified for the second successive time.

The petitions and threats of court notwithstanding, the disclosure by Eric Dzakpasu raises doubts about the possibility of the EC accepting any of the disqualified aspirants who are fighting tooth and nail to get back on the ballot.

Dzakpasu said the race for president is a competitive process with strict rules and regulations which all parties must abide by.

He said any attempt by the EC to bend the rules to favour any candidate will not bode well for the Commission.

Eric Dzakpasu said the EC remains focused and will go ahead with its planned activities leading to the December 7 elections.