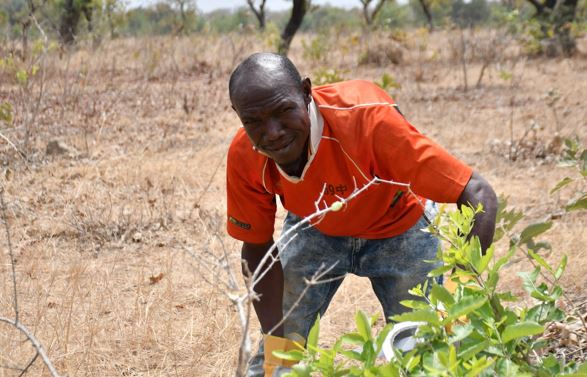 Wider adaptation of the Farmer Managed Natural Resources (FMNR) concept by local farmers in the Savannah landscape is not only restoring degraded lands and biodiversity in the region, but it is gradually contributing to halting desertification that marches violently northwest.

“We have more than 100 farmers practicing FMNR in 20 communities from Kassena-Nankana West District and West Gonja Municipal in the Upper East and Savannah regions respectively.

“Based on the evident of FMNR practices in the Yameriga community, many communities are beginning to adopt it,” said Joseph Yelkabon, LEAN Project Manager at World Vision Ghana.

The uptake of the approach by farmers was as a result of the LEAN Project’s intensive field activities such as community exchange visits, training, and sensitization.

A significant regrowth of vegetation has resulted in the improvement of fodder for animals and biodiversity in the Yameriga community, one of the FMNR model communities.

It is refreshing to know that, through the farmer learning visits to Yameriga, a total of 20 FMNR sites have been established in some communities in Kassena-Nankana West and West Gonja Muncipal. By the end of the project lifespan, we hope that communities will be incentivized to rehabilitate over 1,000 hectares of degraded lands in the savannah landscape through the adoption of the FMNR concept,” said LEAN Project manager, Joseph Edwin Yelkabong.

Before the implementation of the European Union (EU)-funded Landscapes and Environmental Agility Across the Nation (LEAN) Project, prolonged drought caused by climate change, combined with land degradation caused by indiscriminate tree felling, bush burning, farming, and construction activities, had transformed the region’s vegetation cover into waste and semi-desert land, resulting in the loss of biodiversity and land infertility.

But FMNR practices by farmers are reversing these unhealthy environmental practices.

“We have outlawed indiscriminate tree felling, bush burning, and other unhealthy environmental practices.

“As a result, there is enough fodder for our animals as well as fruits, nuts, and near-extinct plants and shrubs,” said Mr. Frederick Wugaa, an Assembly member in the Kassena-Nankana West District Assembly.

The LEAN project is using integrated approaches such as training, field demonstrations, and exchange visits, as well as stakeholders’ engagement, among others, to create awareness of the need for the restoration of degraded lands.

As part of the sustainability plan of the project, the capacity of community leaders, local lead farmers, women and youth leaders has been built.

The project is building strong community-based governance structures to ensure that decisions are gender-sensitive, locally owned and sustainably structured to live beyond the project’s lifespan. The project is targeted to reach non-indigenous groups, women, youth, landless people, and others and is connected to the local landscape initiative and to national level policy makers for scale up and replication.

The LEAN project is being implemented by World Vision Ghana, Rainforest Alliance, Tropenbos Ghana (TBG), and Eco-Care Ghana with funding from the European Union (EU).

DISCLAIMER: The Views, Comments, Opinions, Contributions and Statements made by Readers and Contributors on this platform do not necessarily represent the views or policy of Multimedia Group Limited.
Tags:
Farmer Managed Natural Resources
Northern region