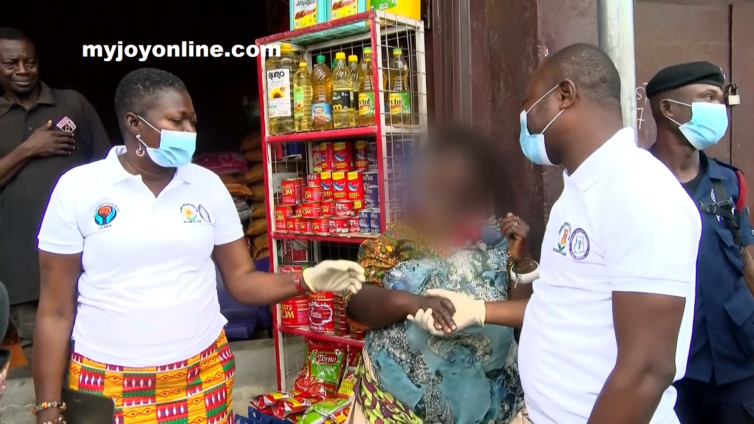 A non-governmental organisation, Willingway Foundation, in collaboration with the Ghana Health Foundation, has launched a programme to rid the streets of Kumasi of mentally-ill persons.

With the help of the Ghana Health Service, Social Welfare and the police, the group removed 10 mentally-challenged women from the streets of Kumasi and Ejisu on day one of the exercises over the weekend.

The inmates would be housed, fed and rehabilitated at the Willingway Rehabilitation Center at Asawasi in Ejisu at the expense of the Foundation, under a project dubbed ‘Hope for the Rejected’.

“ I have never been paid for this work. It’s just a passion. It is my passion to help those with mental challenges,” CEO of Willingway Foundation, Lydia Yaa Manu spoke of the exercise.

The streets of Kumasi and its environs have been inundated with the presence of mentally-ill persons.

There’s little effort from the Local Government Ministry to get rid of those who pose a security and safety threat.

In the face of this public safety failure, a non-governmental organization has taken the lead to rid the streets of these individuals with mental problems.

Willingway Foundation is providing medical care for the inmates in a well-maintained shelter, as well as feeding and clothing them.

“Last year, we had about 4or 5 people who were having their babies with them. So some people called on us  and we went for them.

We started with the treatment and they became stable and were able to direct us to their families. So, we realize that that means those people on the streets when we have a good place to keep them and give them good treatment, they would become useful to the community,” Madam Manu explained the rationale behind the exercise.

The first day of the exercise proved a herculean task for the team, made up of the police, health personnel  officials of Social Welfare and Willingway Foundation.

The targeted persons were not only  aggressive but also hostile as they resisted attempts to move them from their adopted abode.

Ashanti Regional Mental Health Coordinator of the Ghana Health Service, Faustina Nuako, a member of the team  said some of them had to be sedated to make them calm.

“Some were very calm; some just boarded the car very calm. Some too were very aggressive.  In fact that is not the right thing to do because of the quality rights but we had to sedate them”.

“Because they were aggressive, we couldn’t have carted them to the other client without sedating them.”

Mrs. Nuako, who commended Madam Yaa Manu and her team for that bold initiative, is courting public support for the exercise.

“This is a good initiative which has to be supported by all . Members of the public can help cloth, feed and maintain the mentally-challenged.

Sister Lydia and her team cannot do this alone.”

Taking undue advantage of the mentally-ill

A 2016 census conducted by the Mental Health Authority revealed 1, 146 mentally-challenged persons, made up of 746 males and 400 females were  on the streets  of Ashanti region.

Mrs. Nuako fears the number has gone up with no public effort to get rid of them on the streets.

“When Covid-19 came, a lot of people had issues because the stigma, anxiety were too much so we know people will develop mental illness and it will push the numbers up”.

The team was however shocked to see two of the mentally-ill patients impregnated by unknown men.

They have been pregnant for months for men who take advantage of their poor situation and  abuse them.

So who could be responsible for their pregnancies?

“ That’s the question I have been asking myself all the time. It’s strange. Looking at their conditions still people go and sleep with them,” Surprised Madam Lydia Yaa Manu responded.

“That’s why we have decided to pick the females because many people take advantage of them,” she added.

Besides the high cost of maintaining the centre, the NGO says it is faced with total societal rejection of inmates who respond to treatment at the facility.

“ I have some clients here who are stable; they are okay but they are not welcomed home because of the stigmatization. Some people even know that their sisters sleep on the streets; they know exactly where they are. They by-pass them every day. They don’t care about them.

That is why I am appealing that when we are done with them, the family should support them”.

DISCLAIMER: The Views, Comments, Opinions, Contributions and Statements made by Readers and Contributors on this platform do not necessarily represent the views or policy of Multimedia Group Limited.
Tags:
Ghana Health Service
Mental Health
Mentally Challenged persons
Willingway Rehabilitation Center