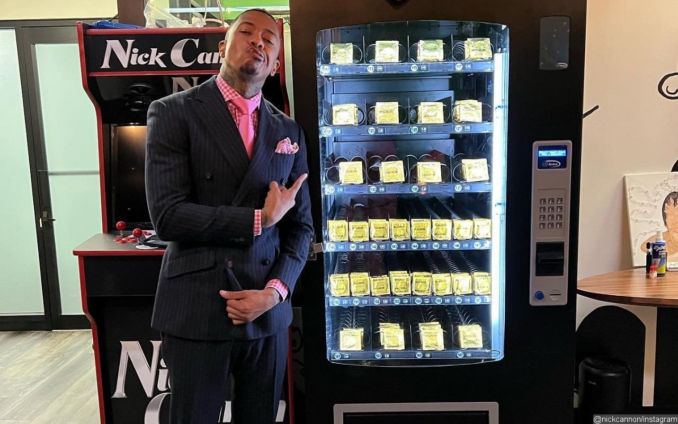 Nick Cannon gets something he may really need as his Valentine’s Day gift. He revealed on Monday, February 7 that someone sent him a vending machine full of condoms.

The talk show host took to his Instagram page to share a picture of him posing next to the said vending machine. In the caption, he wrote, “Looks like somebody just sent me an early Valentine’s Day gift!! Vending Machine full of Magnums.”

Some of Nick’s followers were trolling him in the comment section. “Try using them lol,” one person said. Another user wrote, “They know what you need! Now take their advice.”

Someone, meanwhile, called it a “perfect” and “very very thoughtful gift.” While Nick didn’t disclose who gifted him the vending machine full of condoms, one person believed that it must be Kevin Hart.

The gift arrived after Nick confirmed that he’s expecting baby No. 8 with model Bre Tiesi in the January 31 episode of “Nick Cannon”. “It’s a boy! We found out yesterday,” the proud dad said. “Everyone knows I have a lot of children. It’s never a competition. Each one is special.”

“The Masked Singer” host later issued an apology as he felt that he should have addressed the baby news in a better way. “I would like to address the comments I made on Monday’s show,” Nick, who mentioned his late son Zen while confirming the news, said in a separate episode. “I wish to always protect and respect the privacy of the mothers of all my children.”

“I didn’t know what to say, so I was probably talking too fast and probably misspoke. And I know I can do better when dealing with delicate and sensitive discussions,” he admitted. “So I promise you, I promise the mothers of my children, I promise my family that I would do better and continue to be more understanding, caring, compassionate like they often show me each and every day.”

DISCLAIMER: The Views, Comments, Opinions, Contributions and Statements made by Readers and Contributors on this platform do not necessarily represent the views or policy of Multimedia Group Limited.
Tags:
Nick Cannon
Valentine's day