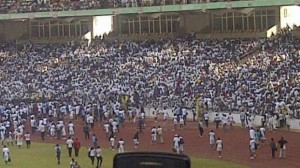 Nigeria's interior minister has rejected calls for him to step down after he blamed job-seekers for their deaths in Saturday's stampede.

At least seven people died after tens of thousands turned up to take a test for fewer than 5,000 positions.

Abba Moro told the BBC that there had been "poor handling" of the event by officials but also said those in the crowd should have been more patient.

He said his resignation "did not arise" until after an investigation.

Mr Moro told the BBC's Newsday programme that "unauthorised" people had broken through the fence into the national stadium in the capital, Abuja, where the tests were being held, causing the stampede.

Similar statements over the weekend had led to calls for him to resign.

Although he said he accepted responsibility, as only one stadium entrance was open at the time, he said he would not step down.

One of the applicants, Mohammed Yusuf, told Newsday he saw two people crushed to death in front of him, saying it was "very terrible".

He blamed the officials in charge of the stadium for the deaths, saying that more than one gate should have been opened.

The recruitment exercise was for jobs in the immigration department. There is a high level of unemployment in Nigeria especially among young people. In 2011, it stood at 23.9%.