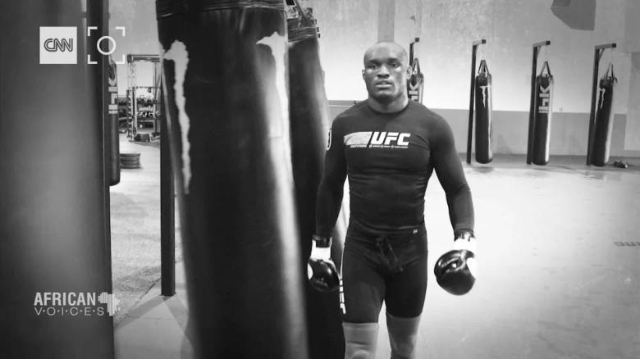 Kamaru Usman believes he was born to fight and on Saturday, the 31-year-old proved it by becoming the first African Ultimate Fighting Championship (UFC) champion after defeating title-holder Tyron Woodley, at a flagship event in Las Vegas.

“If Tyron Woodley doesn’t bring his A-game, it’s going to be a short night,” Usman had said about the man who had been welterweight champion since 2016.

For Usman, the UFC presents the perfect arena to showcase his talent for a sport he joined at elite level in 2015.

Since joining the UFC, Usman has slowly worked his way up the ranks from rookie to title challenger in the space of just a few years.

Born in Auchi, in the midwestern Edo state of Nigeria, Usman moved to the United States when he was seven, finding a passion for wrestling in high school.

In 2010, he won a national title while in college at the University of Nebraska at Kearney. He hasn’t looked back since and now has a record 14 wins and just one loss in his mixed martial arts career, also known as MMA.

Like many Nigerian fighters before him, Usman is nicknamed the ‘Nigerian Nightmare,’ and is one of around five Africans in the UFC.

Usman’s rise has also brought attention from some friends in high places, notably, Dana White, president of the UFC, who said in a recent interview: “I was impressed. I’m telling you, I want to see him fight Woodley now. I want to see the Woodley fight. That’s what I want,” he said in a post-fight interview with Fox Sports.

On Saturday, he got his wish in the eagerly-awaited showdown with the American fighter Woodley.

In a CNN interview, Usman says he believes he could be welterweight champion by now if he had gotten the chance to fight Woodley as planned in September last year.

Usman was penciled in as the backup for a fight between Woodley and English challenger Darren Till in America last year, amid fears that Till would not make the weight required to fight in the division.

Usman says he went on a grueling training camp and a strict diet to prepare for the potential fight.

In the end, the fight never happened as Till made the weight just a day before his bout with Woodley, which he eventually lost.

Though disappointed not to get the chance, Usman is sanguine about the experience.

“I was ready and fully waiting to take full opportunity of that, but it didn’t happen, so hey, it’s not in God’s plan for me. Maybe God wanted me to get it a certain other way, but I’m gonna do everything in my power to make sure that I’m a champion.”

Usman went into the bout with Woodley in good shape after dominating Rafael dos Anjos, a former lightweight champion, over five rounds in December.

Tough love growing up in Nigeria

Usman believes growing up in Nigeria has been instrumental in his steady rise to the top of his sport.

“I lived with my grandmother for a year when I was very young, and even to this day when I tell my mother events that took place, she can’t believe that I can recall that far.

“I recall a lot of it. I recall the hard work that my family went through just to continue to live the lifestyle that we were living, which wasn’t by any means a great lifestyle.

“It was just an amazing lifestyle to instill certain values in a child.”

Usman is not the only fighter in his family. His younger brother, Mohammed, is also a fighter on the MMA heavyweight circuit with three wins and a loss to his name.

When Usman isn’t preparing for career-defining fights, he attends to family duties such as looking after his daughter and taking her to daycare.

“You have to be able to find a balance [with your family],” he says.

Although the odds were stacked against him, Usman fought to the end on Saturday to make history because that’s the only way he knows how to.

DISCLAIMER: The Views, Comments, Opinions, Contributions and Statements made by Readers and Contributors on this platform do not necessarily represent the views or policy of Multimedia Group Limited.
Tags:
Kamaru Usman
Ultimate Fighting Championship