Nigerian policemen arrest journalist, one other during #EndSARSMemorial protest 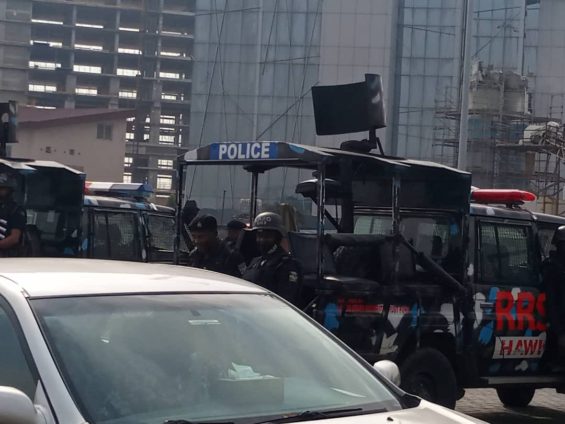 A journalist with Legit TV who identified himself as Abimbola has been arrested by policemen of the Lagos State command at the Lekki Toll gate during the memorial #EndSARS protest.

The police also arrested a young man clad in a white attire who had come to the venue with an #EndSARS banner.

From a video shared, Abimbola was dragged by his belt to the police van parked nearby.

He confirmed to his colleagues that he had misplaced his Identity card in transit but had his car parked somewhere around with a driver’s licence in it.

Abimbola also alleged that the officers hit him inside their van.

The police warned that anyone coming to the Lekki tollgate must come with a form of identification.

The Lagos State Commissioner of Police, Hakeem Odumosu, on Wednesday, said the command would deploy all legitimate means to stop or neutralise the planned protests to mark #EndSARS anniversary.

Odumosu, in a statement issued by the Lagos State Police Command’s spokesman, Adekunle Ajisebutu, had said the attention of the command had been drawn to a post being circulated on the social media insinuating that the police in Lagos had agreed to allow street protests in commemoration of the one year EndSARS anniversary on 20th October, 2021.

DISCLAIMER: The Views, Comments, Opinions, Contributions and Statements made by Readers and Contributors on this platform do not necessarily represent the views or policy of Multimedia Group Limited.
Tags:
#EndSARS
Arrest
Journalist
Memorial
Nigeria
Police