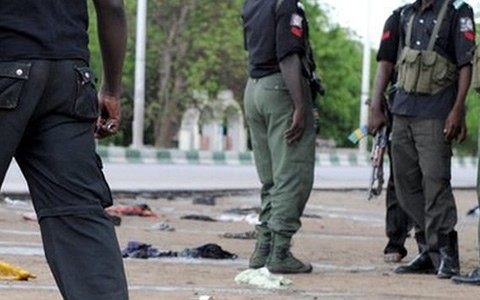 Dozens of young men have been shot dead in Nigeria by the military in Maiduguri, residents in the north-eastern city have told the BBC.

An imam told the BBC about 11 youths from his street alone were killed, including four of his own sons.

The alleged extrajudicial executions happened as Amnesty International accused the security forces of abuses in its crackdown on Islamist militants.

A military spokesman in Maiduguri said he was not aware of the incident.

But Lt Col Sagir Musa told the BBC investigations would be made.

Maiduguri is the stronghold of the Islamist militant group Boko Haram, which is fighting to impose Islamic law across Nigeria.

Hundreds of people in northern and central Nigeria have been killed in attacks blamed on the group over the last two years.

Amnesty International said in a report on Thursday that the security forces have carried out widespread abuses in their campaign against the militants, killing, torturing and burning the houses of innocent civilians. Allegations denied by the military.

Malam Aji Mustapha, an imam in Maiduguri, said after morning prayers on Thursday soldiers took him and his children to an open field where many people had already been taken.

People were called forward for a screening process – the young men were checked against photos on a computer database and some of them were separated.

He said that they were ordered to look away and then he heard gunshots.

“They killed four of my children in front of me. They took their bodies to the mortuary of the general hospital,” he said.

When he went to collect the bodies later, he saw the bodies of 48 youths, the imam said.

“In my street alone, about 11 youths were shot dead and no-one has given us an explanation about what they did.”

The BBC Hausa Service has spoken to other residents in the city who had similar stories about house-to-house searches across the city – and those rounded up taken to the field for screening.

One man told the BBC he saw a dozen corpses at the general hospital. He identified one of them as a friend with whom he played football.

In response to the Amnesty International accusations, Nigeria’s Finance Minister Ngozi Okonjo-Iweala told the BBC’s Focus on Africa programme that the government would never condone human rights abuses, but it should be remembered that the army was trying to curb “terrorist” acts.

“I think you need to look at the circumstances. When the UK was battling terrorism… the US, they had Guantanamo Bay…. All countries, when the security of their citizens is at stake, they try to use all the tools at their disposal,” she said.

Ms Okonjo-Iweala added that she objected to suggestions that the security forces acted in a “heavy-handed” way.

“Everyday our security forces are putting their lives on the line to fight this issue [of violence by Boko Haram].”