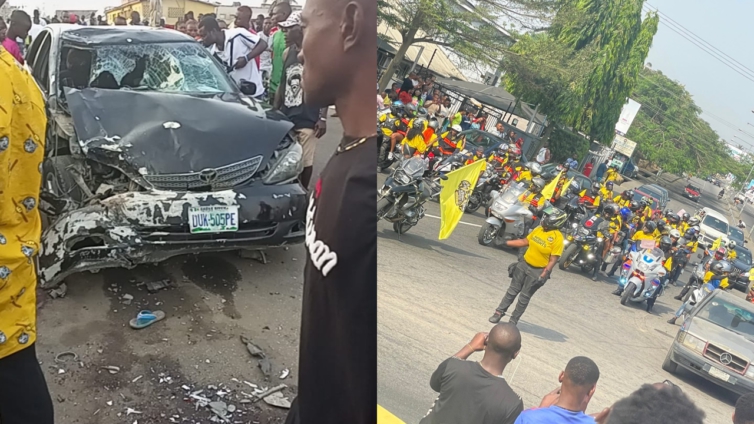 At least 14 people have been killed and 24 others injured after a vehicle ploughed into crowds watching bikers at a popular carnival in Nigeria’s southern port city of Calabar.

Eyewitnesses said that a speeding driver lost control of the car.

Pictures shared online in the immediate aftermath of the incident show bodies strewn across the street.

The month-long annual carnival, which features several events, has become a big draw since it was launched in 2004.

Describing itself as Africa’s biggest street party, it attracts local and foreign tourists throughout December.

This year’s event was special because it was the first since the Covid pandemic, which had forced its cancellation for the last two years.

Tuesday’s incident took place during the popular bikers’ parade on one of the major carnival routes which had been closed to vehicle traffic.

The event features riders including celebrities from across the country, some adorned in colourful costumes, performing stunts.

The police said a drunk driver – who has been arrested – had lost control of their car and ploughed into the crowd.

A father of a 15-year-old boy who was injured in the incident told the BBC that the car was being driven “recklessly”.

“The driver had been swerving from left to right and then when he got to where the crowd stood, he started spraying money on the road. The crowd rushed to pick up the money, which is when the ugly incident took place,” Musa Kutama said.

His son Abdulsalam Musa Kutama survived but with scratches to his face and cuts to his thigh.

The teenager was among 24 people who were rushed to Cross River state’s navy hospital and University of Calabar teaching hospital for treatment.

“We were at the navy hospital last night – they treated him and gave us some drugs, later discharging him. He is currently at home healthy and good,” Mr Kutama said.

A statement from the state’s governor, Professor Ben Ayade, said the government was investigating how the car passed through the many security barricades which barred access to public traffic.

Prof Ayade cancelled the rest of the bikers’ parade but other events planned for the rest of the carnival – which is set to end on New Year’s Eve with a fireworks display – will still go ahead.

DISCLAIMER: The Views, Comments, Opinions, Contributions and Statements made by Readers and Contributors on this platform do not necessarily represent the views or policy of Multimedia Group Limited.
Tags:
Bikers race
Calabar
Nigeria