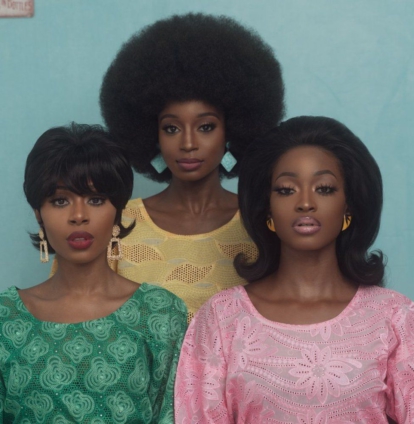 When an aunt sent Oye Diran an old family photo, he was mesmerised by the high sense of fashion and style exhibited by the Yoruba women of West Africa in the 1960s, 1970s and 1980s.

The photo was of his mother and her sister adorned in iro and buba, the colourful two-piece outfit of wrapped skirt and top popular with Yoruba women in Nigeria.

Diran, a Yoruba himself and Nigerian photographer based in New York, noticed how the style of the iro and buba had evolved over time, but that the outfit still maintained its elegance.

Inspired, he ploughed through the internet looking for more vintage images of the outfit but was disappointed with what he saw.

“What I found were updated and modernised versions that people wear today which wasn’t what I needed,” he told the BBC.

He then picked up his camera and produced a series of images which he titled A Ti De (We Have Arrived).

The Yoruba are Nigeria’s second largest ethnic group with a reputation for loud celebrations and incessant parties – anything from a new child to a new house warrants a huge gathering of friends and family and music, food and drinks.

The centrepiece at gatherings, especially weddings, are the matching colourful outfits worn by guests.

For the women it is the iro and buba which in the past would sit at the bottom of the steel box awaiting its call for that special occasion.

But its glory days are long gone, replaced by the aso-ebi, when guests all wear outfits made from the same pattern.

As a sign of how times have changed, the aso-ebi doesn’t sit at the bottom of a heavy steel box, but hides in the darkest corner of a wardrobe, away from the light and other not so important outfits, as it awaits the special day.

“Yoruba fashion has evolved in different ways over the last few decades but has always maintained its authentic look,” Diran told the BBC.

“I feel we started seeing more of its modernisation from the 2000s up until today.

Diran, a fine art and fashion photographer, was born in Nigeria’s commercial capital, Lagos, to a mother who was a visual artist and a father who was a veterinary doctor and businessman.

“My mother had an art studio in our childhood home where I would see old work she had done along with new pieces she was creating through mixed media, drawings, paintings and photography.

“I basically grew up surrounded and inspired by art.”

He fused his background in art and his interest in photography to create his current style which he describes as “conceptual with a degree of minimalism”.

He mostly creates with a palette of neutral and pastel colours.

“I try to illuminate a sense a beauty, empowerment and ideologies in my images,” he said.

The Yoruba fashion has evolved to incorporate trends, from flared sleeves to puff sleeves to off-shoulder blouses and narrower collars.

Materials that weren’t traditionally used, from chiffon to organza are now being worn and most importantly, the outfits that were traditionally loose are now more fitted.

“A Ti De is a phrase of confidence,” he said.

“It is used to announce one’s arrival in a celebratory fashion in most cases.”

For the party-loving Yoruba people, truer words have never been spoken.

DISCLAIMER: The Views, Comments, Opinions, Contributions and Statements made by Readers and Contributors on this platform do not necessarily represent the views or policy of Multimedia Group Limited.
Tags:
Nigeria
Oye Diran
Yoruba