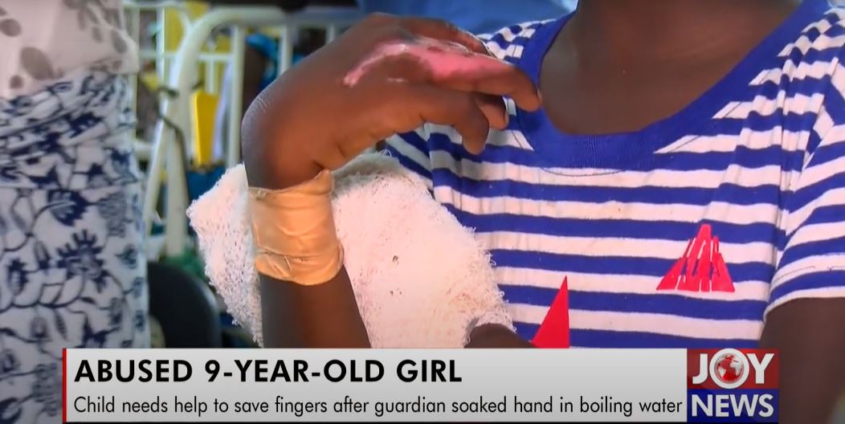 The battle to save the fingers of a nine-year-old girl which were immersed in boiling water by her guardian over two Ghana cedis continues at the Komfo Anokye Teaching Hospital (KATH) in Kumasi.

Plastic Surgeons led by Dr. Emmil Tanor are expected to go into the second round of surgery on Tuesday with little Stephanie.

“So the first surgery went well. According to the plastic surgery team, they were able to separate the fingers that were clenched together and so now the fingers are straight and have been divided. She has been feeling weak and has not been eating properly since the first surgery, she tells me she is not in the mood to eat but we have been trying to encourage her to eat something,” Erastus reported.

He added that due to her inability to eat, she had to undergo a blood transfusion to allow her go through the second surgery which is expected to happen today.

He said doctors say the second surgery would focus on repairing the damage caused to her hand.

“So the second surgery is expected to take some flesh from parts of the body and do skin grafting of the palm of the fingers and other parts of the hand that has lost soo much tissue to be able to try to save the hand,” he told Emefa Apawu on midday news on Tuesday.

According to Erastus Donkor, some non-governmental organisation, a mining firm in Bibiani and the husband of the woman responsible for the action have been funding the surgery so far.

“We have had some support from Nature Aid which is a non-governmental organisation, one Mr. Barado has helped pay for some of the medication we bought, the man whose wife did that to the girl has also paid for part of the surgery as well. We have had Mensin Gold in Bibiani also coming in to support the team with some funds as well,” Erastus said.

Luv FM’s Erastus Asare Donkor on May 6 reported that the nine-year-old girl gave a chilling account of how her guardian held her hand into boiling water as punishment for taking ¢2 to buy food without her consent.

Ellen Serwaa, a teacher, is accused of managing the injury at her house in the Ahafo regional town of Goaso for days until the child’s hand deteriorated.