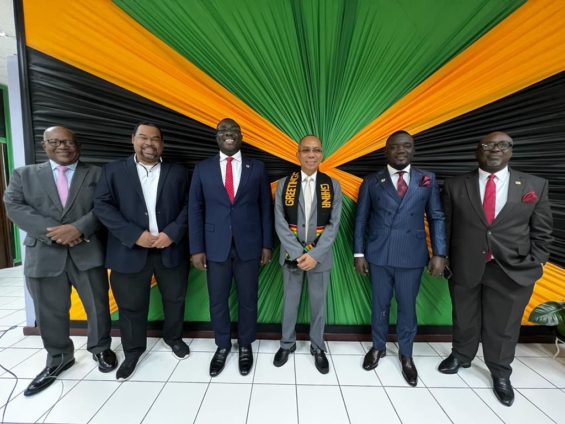 The National Lottery Authority since the assumption of office of Samuel Awuku as director general has seen a lot of international and foreign collaboration.

This, Mr. Awuku says, is to diversify the authority’s revenue potential and also use such opportunities to sell Ghana’s famous products on international platforms.

The first of these measures was getting The NLA back as a member of the African Lotteries Association (ALA) and World Lottery Association (WLA) respectively.

This sets the tone for Ghana to trade our game in other countries and other opportunities the Authority stands to benefit from these very important associations. Apart from this Mr. Awuku is building strong bilateral relationships with some countries so Lottery companies and service providers can have the opportunity to do business out of the shores of the country.

One of such visits took the NLA boss Mr Samuel Awuku and some management members to the republic of Jamaica. Other management members on the trip were Kwabena Opoku Boakye Director of Marketing and Goodfellow Dei Ofei the Public Relations Manager of the Authority.

In Jamaica as protocol demands the Ghanaian delegation paid a courtesy call on the Deputy Prime Minister of Jamaica who also doubles as the National Security Minister Honourable Dr. Horace Anthony Chang, MP. The Deputy PM welcomed the team and explained his country and Ghana have a long-standing relationship and underscored the need to promote culture and business relations between these two countries.

He observed that a direct airline between West Africa and the Caribbean has been a major impediment and promised leadership of these countries will start a conversation to get it resolved. Hon. Dr. Chang said Lottery has been a major source of support for the Jamaican Economy and said for them proceeds of lottery is invested in Culture, Health, Education and Sports Development.

Mr. Awuku on his part conveyed greetings from the president and people of Ghana, especially the board management and staff of the National Lottery Authority( NLA). Mr. Awuku said “ Hon. Deputy Prime Minsiter we are here to share ideas and learn best practices that will be critical to the growth of lottery in Ghana. The NLA will be 60years on the 29th of September this year. We have chalked a lot of successes and have also had our own challenges but we want to move Lottery in Ghana forward and make it a world class lottery industry.

The NLA is looking forward to granting the first license for a Caribbean company to operate lottery in Ghana and in West Africa so this visit will afford us the opportunity to assess for ourselves the capacity of the suitors. Mr. Awuku and his team later paid a working visit to the Betting Gaming and Lotteries Commission of Jamaica (BGLC) the regulator of the Lottery and Gaming in Jamaica. The several hours meeting afforded both teams the opportunity to share their individual experiences and the strategies they have both adopted to tackle some similar challenges they both face. The Jamaican team took the delegation through their rigorous licensing and compliance procedures and other operations procedures they adopt for their work.

The delegation then met the biggest operator in Jamaica Supreme Ventures Group (SVG) where they were taken through their various operations and different products they offer.

Mr Awuku and the team also inspected some sales points of Supreme Ventures across the island and also observed the painstaking process of running their daily draws, it is instructive to note that they run a combination of 6 draws a day and they only do not work on Christmas and Easter holidays.

The former Jamaican leader who served as the sixth prime minister of Jamaica from 1992 to 2006 was pleased to welcome the NLA delegation to his home. Mr. Awuku and PJ as he is affectionately known had a long conversation spanning from African Caribbean History, to economy and Politics.

Most Hon. PJ Patterson said “I have read a lot about you Sammi and I can see some similarities with our beginnings, I was youth Leader and later National Organiser of my Party the Peoples National Party. I wish you well in all of your endeavors here in Jamaica and it is my hope that Ghana can open its doors to its Caribbean friends to explore the possibility of doing business together in the area of Lottery, Gaming and Betting.

The NLA team is exploring the possibility as well in linking local private lotto operators to other International players to strengthen Ghana’s system.

The NLA Team has been in the Caribbean Nation for a week on this study and familiarization tour upon invitation by the Jamaican Lottery Industry.