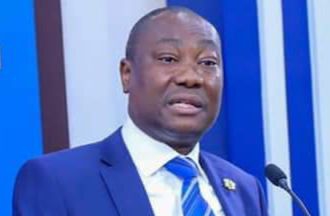 The Minerals Commission has refuted allegations that the Minister for Lands and Natural Resources, Samuel A. Jinapor, has granted prospecting licences to some companies to prospect for minerals in Forest Reserves.

The Commission said this is false.

This is contained in a press release dated August 17, 2022 in reaction to a publication by the Member of Parliament for Tamale North Constituency, Mr. Alhassan Suhuyini. It is signed by the Chief Executive Officer, Mr. Martin K. Ayisi.

In the said publication, Mr. Suhuyini alleged that despite the ban on prospecting in Forest Reserves, the Minister has granted prospecting licences to some companies.

However, the Commission in the release said, “The said publication is false and should be disregarded by the public. Since assuming office as Minister for Lands and Natural Resources on 5th March, 2021, Hon. Jinapor has not granted a single prospecting licence to any company to undertake any exploration activities in Forest Reserves. Any person with a copy of any such licence should produce same.

The Company also applied for a Forest Entry Permit to enter the Tano Nimiri Forest Reserve. By a letter dated August 8, 2022, the Forestry Commission wrote to the Minerals Commission indicating that although it has, in principle, no objection to the Company’s application, the application must be processed “subject to the Honourable Minister of Lands and Natural Resources’ directive on mining in Forest Reserve” the statement explained.

The Minerals Commission further clarified that “The Forestry Commission’s letter does not constitute a Forest Entry Permit nor a prospecting licence.”

The Commission expressed its commitment to working in accordance with its mandate, “The Minerals Commission is, by law, mandated to make recommendations to the Minister for the grant of any mineral right. The Commission will not make any recommendation that contravenes Government policies, including the ban on reconnaissance, prospecting and/or exploration in Forest Reserves.”

DISCLAIMER: The Views, Comments, Opinions, Contributions and Statements made by Readers and Contributors on this platform do not necessarily represent the views or policy of Multimedia Group Limited.
Tags:
Forest Reserves
Minerals Commission
Ministry of Lands and Natural Resources (MLNR)