President Xi Jinping emphasized unity, development and strength as he addressed the world on the 70th anniversary of the People's Republic of China on Tuesday, saying: "There is no force than can shake the foundation of this great nation."

Standing in Beijing's Tiananmen Square, where Mao Zedong declared the founding of the PRC on October 1, 1949, Xi added: "Today a socialist China is standing in front the world."

"No force can stop the Chinese people and the Chinese nation forging ahead," he said in front of jubilant crowds cheering and waving Chinese flags.

Xi's address was heavy on nationalist strokes, playing into the long-term Communist Party narrative of lifting China from the "century of humiliation" it suffered under the Qing Dynasty, amid invasion by colonial powers including the United Kingdom and Japan.

Xi pointedly brought up Hong Kong, where anti-government protests have been raging for more than three months, saying that China must remain "committed to the strategy of peaceful reinforcement of one country two systems," the framework that governs the semi-autonomous Chinese territory. Protests are expected to continue in Hong Kong on Tuesday.

"We will maintain long-term stability of Hong Kong and Macao, the development of cross-strait relations, and continue to strive for the complete unification of the country," Xi said. 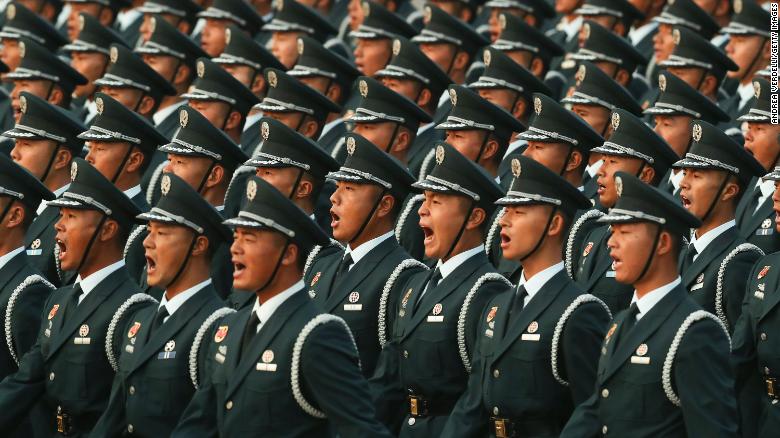 After inspecting troops along Chang'an Avenue, Xi presided over a massive military parade showing off some of the world's most advanced weaponry.

About 15,000 personnel, more than 160 aircraft and 580 pieces of weaponry and equipment were involved. Key among those was drone technology — of which Beijing boasts some of the world's best — and advanced missile systems.

Helicopters flew national flags across the sky and aircraft flew in formation to create a "70," in honor of the 70th anniversary. However the grand effect was spoiled somewhat by high levels of smog — according to the World Air Quality Index, the AQI in the Chinese capital is 159 today, "unhealthy" on the international scale.

One highlight of the parade was the first public appearance of the the DF-41 intercontinental ballistic missile, said Carnegie Tsinghua Center senior fellow and military analyst Tong Zhao. Much of the pre-event hype had focused on the weapon, thought to be the mainstay of the People's Liberation Army Rocket Forces (PLARF) arsenal and, by some estimations, the most powerful missile on the planet. 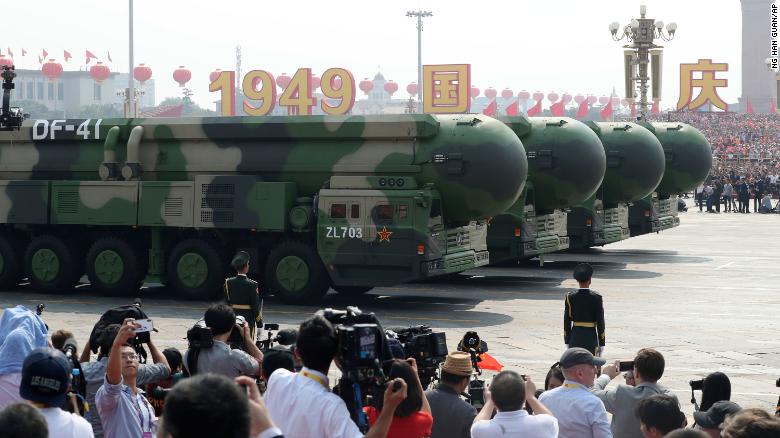 Along with traditional air drones, China paraded its underwater vehicles including what could be its first undersea drone. Speaking on the live broadcast, a state TV commentator said the underwater drone could "dive deep under the sea" for surveillance and to carry missiles.

China also paraded a range of stealth drones. While the drones were not labeled or announced by state TV, analysts had predicted their appearance for weeks. One drone, the DR-8, is thought to be able to fly up to five times the speed of sound.

Another heavyweight was the giant JL-2 submarine missile — the main weapon aboard China's Jin-class fleet of nuclear-powered ballistic missile submarines.

A colorful "citizens march" followed the military parade with 100,000 people, 70 floats and 36 formations organized around the themes of founding of a nation, reform and opening up, and great rejuvenation. 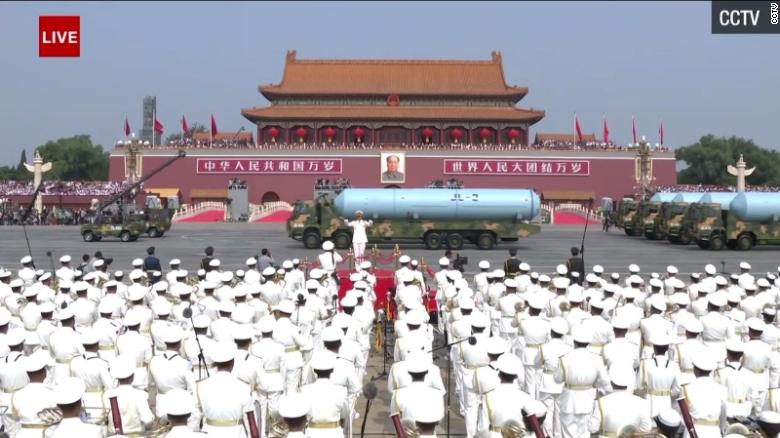 Image of strength and unity

Beijing has been on high alert for weeks, with a heavy security clampdown including road closures, the banning of flying drones, kites and even racing pigeons, as well as greater restrictions on the already-heavily censored internet.

Early Tuesday, the enormous streets of the Chinese capital were almost completely deserted. Checkpoints manned by dozens of guards and metal barriers had blocked all roads leading to Tiananmen Square, rendering large parts of the inner city entirely inaccessible.

Hundreds of Chinese flags adorned streets and shopping malls, and cinemas were running exclusive screenings of the military parade.

There was an air of excitement among residents. In Dongcheng district, retired 67-year-old Guo Fucheng said he planned to watch the parade at home with his dog, Feifei.

"China has been through so many rains and storms … I feel very proud of our country, we now have more say on the global stage," he said.

Beijing is hoping to project an image of national strength and unity.

"It is to show how much progress it has made, and how much more advanced it is compared to years before. Now, China has better capability to defend itself. It deserves equal and fair treatment from other powers," Tong told CNN in Beijing.

The parade is also designed to show the capabilities of President Xi, who is the country's most powerful leader since Mao. "This parade highlights him as the paramount leader in China who is loved and applauded by the general public. Despite external challenges, he can still enjoy wide public support which he sees as necessary for China as a nation to continue this struggle," Tong said. 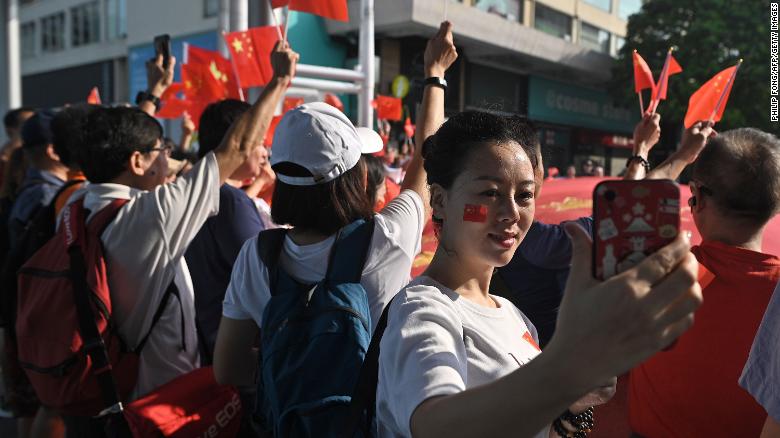 But Xi is facing major tests including the ongoing US-China trade war, rising pork prices and his defining Belt and Road Initiative, a hugely ambitious trade and infrastructure mega-project linking China to markets across central Asia, Europe and Africa that is failing to deliver the economic boom it once promised.

Anti-government protests in Hong Kong are also threatening Xi's image of a man in control. Pro-democracy protesters have planned citywide demonstrations across the city on Tuesday, threatening to overshadow and disrupt Beijing's carefully crafted celebrations.

By 9 a.m. local time, there were already reports of protesters being pepper sprayed by police, and more unrest is expected as demonstrators fan out across the city.