No one loves John Mensah than me but… Appiah 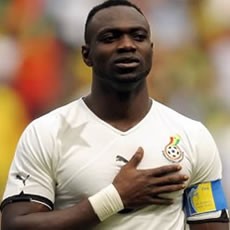 Black Stars coach Kwasi Appiah has paid glowing tributes to the qualities of former captain John Mensah while still axing him from the 26 provisional Black Stars list for the World Cup.

The coach announced the squad Monday at a heavily attended press conference held at the FA Headquarters.

Missing from the team included John Mensah, Richard Kingston all of whom were key in the 2010 World Cup in South Africa.

Asked why he left out the experienced John Mensah, the coach said: "No one loves John Mensah more than me."

He said he was happy when the former Lyon and Sunderland defender had a team after injuries kept him out of action for several months.

Unfortunately he said, Mensah played three games; taken out in the 11th minute in his fourth game and had since not featured any more.

He said John Mensah like any other player will still be considered in the event of injuries to the players mentioned.

Except goal keeper Stephen Adams all the 25 players named are foreign based stars, raising questions about whether the coach is interested in using local based players.

But Akwasi Appiah insisted he is looking for competence and not necessarily where the player is based.

The team will begin a non-residential camping on May 24 and will play two friendly matches against Holland and South Korea before heading to Brazil for the mundial.