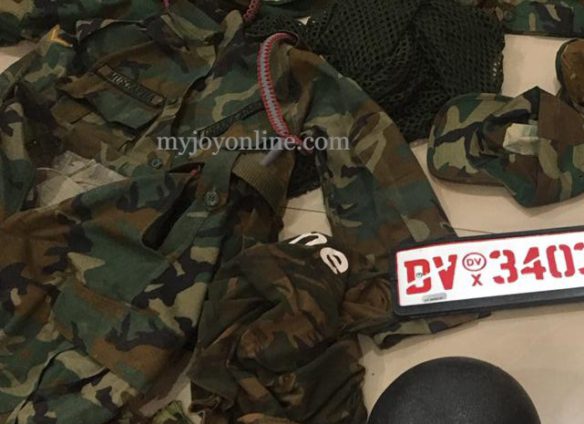 The Ghana Armed Forces has said that one of the suspects arrested by the Police in the Northern Region, in the case involving a car snatching syndicate, is not an army officer.

In a press release, signed by Acting Director, Public Relations, Commander Andy La-Anyane, GAF stated that none of their officers was involved in the robbery that led to the arrest of five persons, despite the seizure of uniforms and other military accoutrements from the suspects.

“The attention of the Ghana Armed Forces has been drawn to several videos and pictures on various social media platforms of the arrest of a car snatching syndicate at Buipe who are alleged to have attacked and snatched a car from a victim at Tamale.

This follows the arrest of five suspected car snatchers and armed robbers by the Police in the Northern Region.

Addressing the media in Tamale, the Northern Regional Police Commander, COP Timothy Yoosa Bonga said one of the suspects, Yussif Mustapha, at the time of arrest, was fully dressed in a military uniform with the rank of Lance Corporal, adorned with an army headquarters lanyard and armed with a military falcon pistol loaded with 9 rounds of 9MM ammunition.

He said two Toyota Camry vehicles, one black and another with a fake registering number AS-8445-19 were among the cars in the suspects’ possession.

COP Bonga added that three sets of military uniforms, two military bags, two sets of Police tactical uniforms, one ballistic helmet for the police among other military accoutrements were found in the black salon car.

Meanwhile, the Armed Forces has expressed concern about the rising numbers of civilians who impersonate officers by wearing military uniforms or posting fake pictures of themselves as military officers to defraud unsuspecting Ghanaians.

“The unauthorised sale of military uniforms and military pattern gadgets by some vendors contributes to this state of affairs and is inimical to national security,” they added.

GAF stated that they are ready to cooperate with the Police to unravel the source of the military uniform in this car syndicate incident.

This, they believe,  would help stop the unauthorised sale of military uniforms across the country.

“The general public is advised once again to be circumspect in dealing with persons who pose as military personnel,” GAF added.