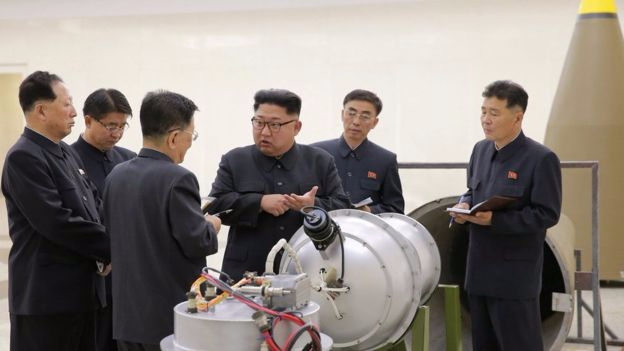 Pyongyang said it had successfully tested a hydrogen bomb that could be loaded on to a long-range missile.

"Their words and actions continue to be very hostile and dangerous to the United States."

"South Korea is finding, as I have told them, that their talk of appeasement with North Korea will not work, they only understand one thing!

"North Korea is a rogue nation which has become a great threat and embarrassment to China, which is trying to help but with little success."

North Korea last carried out a nuclear test in September 2016. It has defied UN sanctions and international pressure to develop nuclear weapons and to test missiles which could potentially reach the mainland US.

South Korea, China and Russia all voiced strong criticism of the move.

He added: "I can't help but be disappointed and outraged. North Korea had made an absurd tactical mistake by committing a series of provocations such as launching ICBM [long-range] missiles and conducting a nuclear test, which was heightened tensions on the [Korean] peninsula and is threatening world peace. It will isolate them further."

Russia said the test defied international law and urged all sides involved to hold talks, saying this was the only way to resolve the Korean peninsula's problems.