North Korea nuclear tests: US and China to co-operate 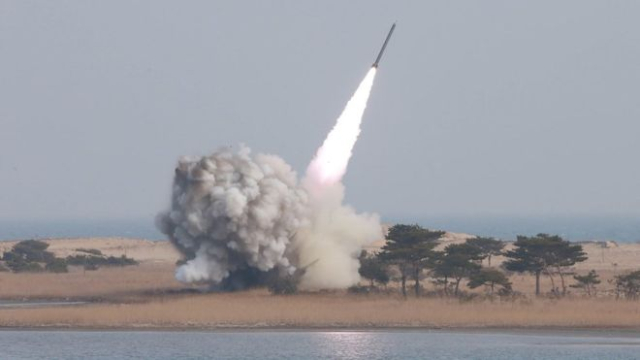 China and the United States will work together to try and prevent further missile tests by North Korea, US President Barack Obama says.

In recent weeks, North Korea has carried out a hydrogen bomb test and has repeatedly test-fired missiles while making threats to the West.

Mr Obama met Chinese President Xi Jinping on the sidelines of a nuclear summit in Washington on Thursday.

Mr Obama said both countries were keen to see a nuclear-free Korean peninsula.

He said he and Mr Xi were seeking to agree "how we can discourage action like nuclear missile tests that escalate tensions and violate international obligations".

Zheng Zeguang, China's assistant foreign minister, said the presidents had a "candid and in-depth exchange of views on a variety of issues…and reached an important consensus". He called the meeting "positive, constructive and fruitful".

North Korea's nuclear test on 6 January and a satellite launch on 7 February were violations of existing UN sanctions.

Since then, the UN and Washington passed further sanctions on Pyongyang. The UN steps were drafted with support by China and reportedly came after two months of negotiations between Beijing and Washington.

Previous UN sanctions imposed after North Korean tests in 2006, 2009 and 2013 did little to dispel its nuclear ambitions.

Much of the burden of making sure the sanctions are implemented is falling on China.

Under the new measures, any North Korean ships arriving in China must be inspected for contraband and imports halted if there is proof profits from those exchanges go towards the North's nuclear programme.

Washington has long pushed for Beijing to put more pressure on North Korea. A White House statement in February said China's "unique influence over the North Korean regime" gave it the chance to do so.

China's foreign ministry last week said it was keen to push for wider talks on North Korea, involving a number of regional powers, during the meeting with Mr Obama. There was no confirmation whether new talks were agreed on Thursday.

Mr Obama also vowed to closely work on the same issue with its allies South Korea and Japan after meeting their leaders on Thursday.

"We are united in our efforts to deter and defend against North Korean provocations," he said.