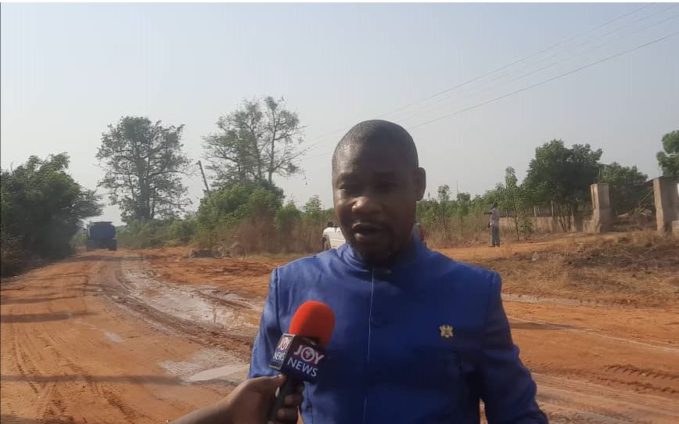 The North Tongu District Assembly, led by the Chief Executive, Osborne Divine Fenu, has started reshaping the Aveyime Battor and Asutuare town roads to make them more motorable for the residents, especially those from the river banks.

One of the main roads in the North Tongu district, the Aveyime Bator town road, which connects to Aveyime and other municipalities in the district, is in a very dire state after contractors left the site when the general election was over,

Residents in the area lodged a complaint to the DCE who, with the help of one of them, contacted a business man who gave out GHC3,000 and the DCE topped it up to start with the reshaping in order to make it easier for the farmers and fisherfolks to operate smoothly while they wait for the contractor to come back to site.

The DCE for the North Tongu District, Osborne Divine Fenu noted that the nature of the roads is such that it becomes more deplorable, especially during the rainy season hence the need for immediate reshaping to help the people.

According to Mr Fenu, the road also links Sege directly to Accra, which is easier than having to go through the main junction when travelling to Accra .

He said even though the contractor assured him of coming back to the site, there was an urgent need for them to at least, pre-finance the reshaping before the contractor comes to continue with the project.

He noted that with the help of some residents and individuals and the Assembly, they would be able to complete the reshaping before the rain sets in.

“The current nature of the road makes it difficult for residents to use, especially when rain sets in and that’s why we decided to start something on our own and get the Assembly to continue with it as we wait for the contractor to return to sight,” Mr. Osborne Divine Fenu noted.

Mr. Fenu said there is so much pressure on the contractor from Prefacon Limited to come to the site and start with bitumen and other works on the road to make it motorable and accessible to the residents as well as visitors.

A resident who helped the DCE with the initiative, Mr. Daniel Saba Kpobi said the roads which were awarded to be tarred became deplorable some months ago and he contacted a man who fetches water from the river by name 3Party for the need to start work on the road which, according to Mr. Kpobi made it possible to put together the initial amount of GHC3,000 for the start of the project.

Mr. Kpobi said when the Asutuare road is fully done, it would open the district to more economic activities which can also help the youths get jobs.