North Tongu has the most suitable soil for Banana farming – Agronomist 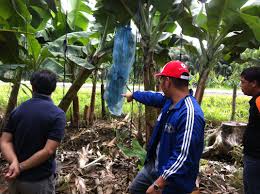 A member of management for the Musahamat Company Limited, a banana production company in Aveyime Battor, has said that North Tongu has the most suitable soil for banana farming.

Yaw Ankrah Budu, an agronomist, noted that his view stems from experience in regard to banana farming and production in Africa. According to him, North Tongu can cultivate bananas in larger quantities.

He said there is a lot of income to generate from engaging in banana farming.

Mr Budu, therefore, called for government intervention by heavily investing in the cultivation of banana.

“It can solve a lot of financial issues for the nation as well get people especially the youths gainfully employed,” he added.

Mr Yaw Ankrah Budu also admonished government to subsidise fertilisers to enable Musahamat Company Limited to do more to help and serve the country regarding banana production and jobs opportunities for the residents.

To address the issue of unemployment, the youth have been advised to take advantage of the loamy soil in the district and go into banana farming to improve upon their standards of living and that of their families.

The DCE for the North Tongu, Osborne Divine Fenu, toured the 240 hectares out of the 1,716 Banana plantation owned by Musahamat Farms Limited.

Mr Fenu noted that government is committed to ensuring sure that Musahamat Farms Limited continues to make positive impacts in the lives of Ghanaians and the economy as a whole.

Musahamat Farms Limited is located in Aveyime Battor in the North Tongu District, and it is mainly a quality banana plantation with its market base in Europe and other parts of the world.

Musahamat Farms Limited currently has 230 employees. Out of the figure, 70 are women.