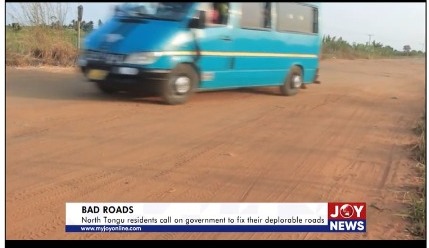 Residents of Bator, Mepe and its neighbouring towns in the North Tongu District of the Volta Region are calling on government to fix their deplorable roads.

They said the nature of the roads have make it difficult for them to use during rainy seasons.

According to the residents, their plight has been worsened by the current economic hardship facing the country. The residents said the situation has been terrible and has affected their economic activities.

They said that transporting goods from their towns to various neighbouring communities has become very difficult and therefore their roads need urgent intervention from the government.

The construction of roads is one of the key policies President Akufo-Addo promised in his second term of office.

During President Akufo-Addo’s inaugural speech, he declared 2020 as the year of roads which saw a major improvement of the road networks in every part of the country, however, there is still a lot more work to be done to improve the flow of road traffic in Ghana.

The residents, however, hope that President Akufo-Addo fulfills his promises as soon as possible in regard to the bad nature of the roads in North Tongu.

Speaking with JoyNews, the residents lamented about how worse their roads have become making it very difficult for them to transport their farm produce.

They said the nature of the roads indicates a bleak future for development progress and demeaning to the status of the people of the area, besides the serious death threats that they pose to road users.

The residents pointed out that the untarred portions of the roads which have been left for a long time had deteriorated and therefore poses danger to vehicular movement.

Chief Executive of North Tongu District, Osbone Divine Fenu noted that residents need the road to be fixed immediately especially him because he crosses the river about three times a week to visit his mother on the other side of the river.

“We all need the road because I drive to the river bank about three times a week, cross the river to see my old lady at the other side of the river and so the deplorable roads need to be fixed and it will be done“, Mr Osbonne Divine Fenu said.

Mr Fenu noted that the construction of the road commenced in 2020 but stalled because of complaints of funding by the constructor.

He also added that the assembly has taken the initiative of purchasing a grader to help make the roads in the district motorable, saying plans are underway to make sure the contractor comes back to the site.

The District Chief Executive also assured that his outfit will ensure pot-holes that have turned to ‘man-holes’, especially at Battor, Mepe and Aveyime towns will all be filled to make the roads motorable.

DISCLAIMER: The Views, Comments, Opinions, Contributions and Statements made by Readers and Contributors on this platform do not necessarily represent the views or policy of Multimedia Group Limited.
Tags:
Aveyime roads
Battor
Mepe
North Tongu