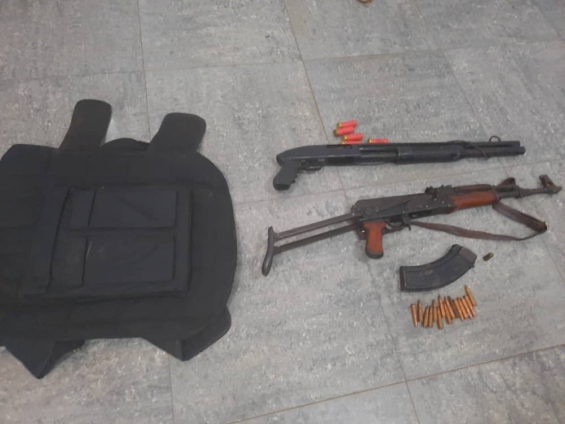 A 30-year-old alleged gunrunner Andani Yakubu has been arrested by the Northern Region police.

At the time of his arrest, he had an AK 47 assault rifle loaded with 15 rounds of ammunition; a pump-action gun also loaded with 5 cartridges and a bulletproof vest.

The police have described the suspect as a notorious gunrunner who has been on their wanted list for sometime.

He was picked up together with one Abdul Salam Abdul Sobo at Dakpemyili a community about 20 kilometres from the capital Tamale.

The two suspects were caught in a Hyundai Santa Fe 4×4 car with registration number GW 3225-16.

He said a joint operational team comprising the Counter Terrorism Unit (CTU), the Criminal Investigations Department and Local Police patrols, all of the Northern Regional Police Command had responded to a call on a Chieftaincy crisis at Bagliga Dakpemyili were the suspects were arrested.

Superintendent Ananga said another empty AK47 magazine a locally made sword and a Jack knife were found in Andani’s room upon further search.

The Regional Police Crime Officer added that the search was extended to his house closer to the Nyankpala Chief Palace where one locally made gun was also found.

He said the police in the course of investigations have also picked Yapalisi Naa (Chief) Alhaji Aminu Ayuba on suspicion of recruiting the suspects in preparation to riot with weapons.

He said Abdul Salam Abdul Sobo, the vehicle driver, denied any knowledge of the firearms on board the vehicle.

The crime officer said their preliminary checks reveal the two suspects were recruited to escort a newly installed chief from Tamale to the village and to lay ambush on the only road to the village to attack opponents of the chieftaincy divide.

The three have been remanded in police custody to reappear on May 31, 2021.

DISCLAIMER: The Views, Comments, Opinions, Contributions and Statements made by Readers and Contributors on this platform do not necessarily represent the views or policy of Multimedia Group Limited.
Tags:
AK 47 assault rifle
Andani Yakubu
Gunrunner