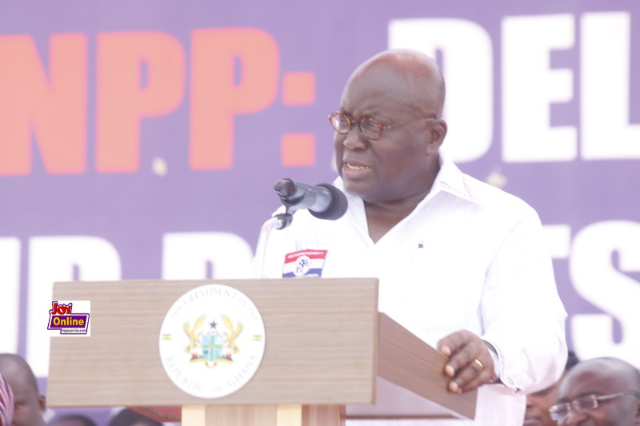 The New Patriotic Party’s Parliamentary Group proposed to amend the party’s constitution to bar members with dual citizenship from holding party positions at the Kumasi Conference on Sunday, December 17, 2017. The sponsors of this contentious and divisive motion indicated that its proposal was in tandem with the 1992 fourth Republican Constitution of the country which bars dual citizens from holding political office. Suspicions were rife before and during the Conference that this motion was smuggled into the amendments’package as some MPs were not aware of the motion standing in their collective name and openly chastised their colleagues who have championed it behind them.

President Akufo-Addo’s political savviness, maturity, an inherent spirit of forgetfulness, wisdom that comes from people with good heart and rare to many saved the party. He rightly predicted doom on the party if delegates at the conference in Kumasi were to go ahead to adopt the motion and observed, “the motion to amend the constitution of the party which will make it impossible for dual citizens to hold party office and contest for elections will lead to the collapse of our overseas branches will be withdrawn.” He added “I am against it,” and stressed vehemently that “it’s a disaster…it is against the tradition of our party and will be withdrawn, and if it comes up I will ask Congress to oppose and reject it.”

This same caucus is known to have been asked to work to repeal the portions of the Constitution to allow holders of dual citizenship to enjoy the same rights as other Ghanaians, an Amendment Bill that has the support of the President and copies have already been submitted to the Speaker, Deputy Speaker, Majority Leader, Attorney General and the Minority in parliament. What antithesis!

Although the amendment proposal to bar dual citizens to hold party office and contest for election was withdrawn at the Conference, certain issues need to be made clear. As a party that believes in equality of opportunities and equal citizenship, the NPP MPs should rather be at the forefront to get this provision repealed from the 1992 Constitution and not the persons who should sponsor it into our party’s Constitution.

From 1992 to date, during electioneering campaigns, dual citizens run home from their countries of residence to help in the campaigns and to vote at their own expense unlike what pertains in another party in this country. When such party people come home, they offer time-tested strategies and proffer solutions to a myriad of challenges that confront the party and sponsor weak and orphan constituencies. Some of such individuals are working behind the scenes in their respective countries of residence either as private individuals or with Ghana’s foreign missions to ensure that the manifesto promises, which among other things, won the elections for the party, are fulfilled.

Some have had their education truncated, families disintegrated, businesses destroyed, hopes and aspirations dashed just because of their decision to join, support, make sacrifices and embark on diverse fundraising projects to resource the party to enable it to prosecute its agenda for growth and capture political power since 1992. The mere conception of this proposed amendment to our constitution meant just plainly that some of our party members at home do not need us again. Is it because the party is now in power?

It is worth noting that in most of the chapters, it is those with dual citizenship that run the programs and raise funds as the other Ghanaians are restricted in the way they can contribute to the party because most of them have immigration, among other issues to spend their time and resources on.

Some of the current parliamentary leadership and many other high-ranking party officials cannot deny the warm hospitality accorded them on their foreign travels, the leads and links, creation of platforms for audience outside Ghana with political and business leaders over the years through the networks these dual citizens have cultivated and nurtured with their time, talents and treasures over the years, all to the betterment of the party

Flagbearers of the party and national executive officers since 1992 and especially those who led the party to victory in 2000 and 2016 cannot also deny or downplay the role played by Ghanaians outside Ghana, majority of who are dual citizens or have taken complete citizenship of other countries and are even required to obtain visas to visit Ghana.

It should be pointed out in no uncertain terms to the sponsors of this contentious motion that building and running a political establishment is a process and not an event. The party is where it is today and some of them are ministers and deputy ministers and enjoying the frills of political office because of the contributions and toils of some people since its formation in 1992. It is both interesting and surprising that some of the party members are desirous to propel their selfish interests, whether detrimental to the fortunes of the party and the young government or not.

It is not enough for the sponsors after failing to cause a defect in the organization of the party to contend that in a democracy, everyone has his say and the collective/majority wishes prevail. No, they should be ashamed of themselves for proposing this ill-fated amendment that has the tendency to spell doom for the party. The young ones among them can be forgiven but those who have joined delegations upon delegations to solicit funds from the foreign branches should come out openly to apologise for just conceiving that thought.

Some members of the external branches will easily and completely erase this phenomenon from the tablets of their memories but many others will remain fixated on this divisive and cancerous attempt to destroy the party and relate to the mother party appropriately. After all, if a snake will not bite you, it will not bear its venom-injecting fangs at you! The intended negative compartmentalization and discrimination against some members of the party, whether withdrawn or not will certainly produce an epidemic of pessimism, anxiety and hopelessness among the party faithful with dual citizenship leading to accentuating negative aspects about the sponsors of this destructive motion in their minds. Truth be told, some of such members in the Diaspora who hold dual citizenship will continually suffer discouragement and even depression as a result of this motion, whether it was withdrawn or not, adopted or not.

Romans 1:21 teaches that being unthankful is the cornerstone sin of all other sins. The sponsors of the motion must remember that ingratitude is a deadly sin that leads people directly into sinful mindsets and has a consequence far out of proportion to what we can expect or imagine. Majority of the intended victims of this motion have started feeling a twinge of anger as their hard work or generous gestures seem to have gone unappreciated by people who have benefitted from their sweat. Proverbs 17:13 has it that:  “If a man pays back evil for good, evil will never leave his house.” (NIV). I pray that the good Lord helps our party not to fall into this situation.

I am not sure the Acting National Chairman’s expectation of getting a more united party after the Kumasi Conference will be achieved because of this motion. He and his team have to work extra hard to achieve the unity he desires for the party leading to the next elections within their extended mandate, which lapses in June 2018.

My advice to the Parliamentary Group is that if they want to continue as parliamentarians for four decades or more as it happens in places like Canada and US, they have to be diligent both in parliament and in their constituencies, establish efficient lobbying machineries to assist them in resolving some of the burning issues of their constituents, eschew arrogance and let humility be their guiding principles but not come up with schemes to stifle the party’s enviable competitive spirit and cherished principle of equality with backdoor tactics.

The entire party will forever be grateful to the president for his show of leadership and his ability to silence those who want to derail his determination to fulfil the promises he made the good people of Ghana by cutting off part of the oxygen he needs to become successful as a president and leave legacies that will ensure future electoral victories for the party.

I wish to ask the honourable members now that the courts are asking the Electoral Commission to implement ROPAL, would they seek permission from the Speaker to go to all the countries where Ghanaians are domiciled to campaign for votes for the party and fund this exercise with their salaries which they complain are woefully insufficient or they, as usual, are going to fall on the party members with dual citizenship resident in those countries? The omnipresence God is watching us all.

Yaw Osei-Amoako is a former secretary (1999 – 2002) and Chairman (2002-2005) of the Toronto Canada Chapter of NPP and recently Election 2016 Situation Room Manager at the National Headquarters, Accra.)