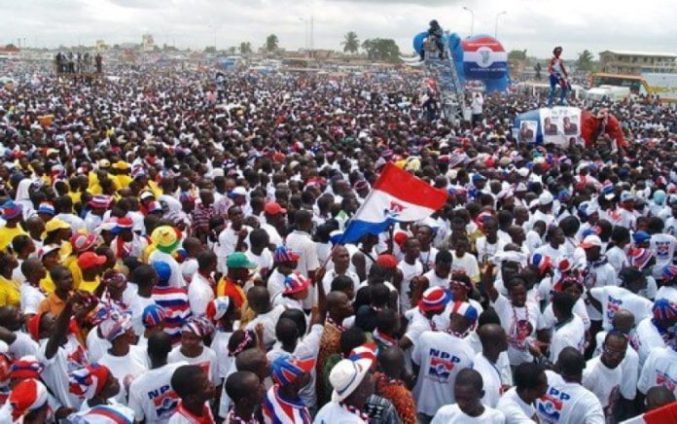 Some concerned members of the New Patriotic Party say the foundation of the party could be weakened if national executives continue to intimidate followers of some would-be flagbearers in favor of others.

The party members insist, there must be the equal application of the rules instead of what they claim is the executive’s usage of power to arrest, suspend or intimidate members who do not support the alleged interest of the Vice President, Dr. Mahamudu Bawumua as a flagbearer of the party.

The concerned members said they are card-bearing members of the party from all the 12 constituencies in the Bono Region.

Addressing a press conference in Sunyani on Monday, the leader of the group, Noah Ramsey Jumah, alleged that several high ranking members of the party, including Members of Parliament and Regional Chairmen, have openly declared their support for Dr. Bawumia, contrary to the rules and regulations as outlined by the General Secretary of the party, John Boadu.

The rules, they said, were to govern the conduct of would-be aspirants and their supporters in the various executive positions and the flagbearers of the party.

Violators of the rules were to be dealt with per the party’s disciplinary code, but Mr. Ramsey Jumah alleges the executives only come after members who don’t support the Vice President.

“Prominent among the violators is a Deputy General Secretary of the party, Mr. Obiri Boahen, the Northern Regional executives led by chairman Samba, the first Vice Regional Chairman of Ashanti, Mr. Kwabena Nsenkyire, the Man of Parliament for Karaga, Mohammed Amin Anta, the Member of Parliament for Tolon, Habib Iddrisu and Farouk Aliu Mahama, MP for Yendi, and many more others”.

“Indeed, at the recent National Delegate Conference of the party in Kumasi, no less a person than the Vice President and second gentleman of the land, Alhaji Dr. Bawumia, in wanton disregard of the rules, arrived at the conference grounds with supporters wearing his branded T-shirts and banners announcing his campaign for the flagbearership”.

“Again, in a most embarrassing break of protocol, he and his followers arrived late to the function, well after President Nana Akufo-Addo was seated with the First Lady and many dignitaries, yet nobody in the National Executives, including Mr. Boadu, the General Secretary, who announced the sanctions, has said anything”, Mr. Jumah claimed.

On the other hand, he said “it has become blatantly clear that when supporters of other aspirants try to stand their ground and protect their own, they are either immediately rounded up by security agencies or subjected to acts of intimidation as it happened at the conference”.

The concerned NPP members leader in the Bono Region also alleged that similar incidents happened in Tamale, where known Alan Kyerematen supporters were either suspended or arrested and put in police cells for defending their own or speaking out against injustices in the party.

“These acts of bias and selective application of the party’s rules and regulations must certainly be of concern to any well-meaning member of the party hoping for victory in 2024”, he said and added that the party is fast losing grip on the much-touted tolerant and democratic party credentials.

Noah Ramsey Jumah said they are calling on elders of the party, including the current and former presidents, to urge the national executives to ensure fairness, else the foundation and grassroots of the party would weaken.

“If the current situation is not arrested and every member of the party made to feel like an equal member with equal opportunities, the party would face a devastating defeat in 2024 with grave consequences into the future”.

He stressed that the concerned members of the party would come out and declare their stands if the tradition of the party is not followed and if urgent action is not heard.

“We won’t sit idle for the party to return to the opposition”.

Some other NPP members who spoke to the media said without transparency and fairness, leaders cannot work to achieve the expected unity and development of the party and Ghana as a whole.

“We would demonstrate against the party leadership if they do not ensure fairness and justice”, a member said.

DISCLAIMER: The Views, Comments, Opinions, Contributions and Statements made by Readers and Contributors on this platform do not necessarily represent the views or policy of Multimedia Group Limited.
Tags:
Dr. Mahamudu Bawumia
NPP flagbearership