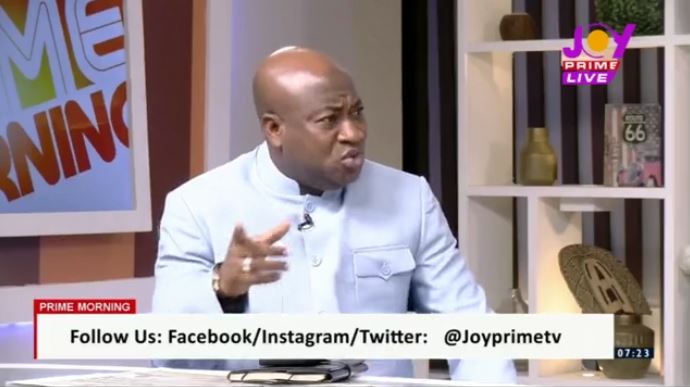 The Member of Parliament for Tamale Central has stated that the leadership of the New Patriotic Party (NPP) lacks the courage to call Kennedy Ohene Agyapong to order, hence their silence on the MP’s conduct.

Speaking on Prime Morning on Joy Prime TV, Murtala Mohammed said, “this dude is a free man walking because everybody in the NPP fears him. Everybody, including the President.”

His comment comes after a recent threat by the legislator on his television station, Net 2 TV against Luv FM’s Erastus Asare Donkor for a journalistic work the latter undertook.

Mr Agyapong, who doubles as the Chairman for Interior and Defence Committee of Parliament on a live TV broadcast, stated that if he were the President of the country, he would have ensured that the journalist was mercilessly beaten.

“He has a history, he has never been circumspect as to what he says. He has a history of such recklessness and then you make him a chairman of such a sensitive, I mean sensitive committee, a committee that is exposed to national security, issues that border on security,” Mr Mohammed stated on Thursday.

He recalled a similar incident in 2019, when an investigative journalist, Ahmed Suale, was killed after Mr Agyapong disclosed his identity and incited hatred against him.

“And this guy [Kennedy Agyapong] did exactly what he did in the matter of Ahmed Suale. He asked people, whoever meets him, should hurt him and within weeks or months, the gentleman was barbarously murdered,” he noted.

Although he stated that “I am not accusing him of the murder of Ahmed Suale”, Mr Mohammed believes that the murder of the journalist was possibly fueled by the utterance of “the recklessness of a Member of Parliament.”

The Assin Central MP has since been referred to the Privileges Committee by the Speaker after the Tamale North MP, Alhassan Sayibu Suhuyini drew the attention of the House to the matter and moved the motion that Mr Agyapong be investigated for his recent conduct.

“Let’s not take this thing lightly. I think that the man should be dealt with and it is not just the Privileges Committees of Parliament,” Mr Mohammed said.

According to him, Ghanaians have a “profound or deep-seated mistrust for Parliament”, therefore, Mr Suhuyini’s call on Wednesday was a step in the right direction as it will protect the integrity of Parliament.

“I think that reckless and irresponsible statements such as the one Kennedy Agyapong made will only deepen such mistrust and that lack of confidence, the people of this country have, for the legislative arm. So I think this is long overdue,” he said.

“Kaaka was murdered, other innocent citizens were murdered by men in uniform, men who are paid with our taxes with the responsibility to protect the territorial integrity of this country.

“Those men in uniform murdered people who were exercising their inalienable democratic and as enshrined in Article 21 of the 1992 Constitution to demonstrate.

“He never made a single statement. If for nothing at all, at least condemn the killing without even accusing anybody because it’s yet to be established by the Ministerial Committee set up by the President.”

“And I am saying that they are so scared of him, tell me which Minister in this government that this man will not attack and go scot-free, tell me,” he asked Daniel Dadzie.

The Tamale Central MP observed that being part of a Committee that is privileged to the, “things that journalists and myself, as a member of Parliament and even some Ministers of state may not know”, Mr Agyapong as the Chairman, should know that he heads one of the most sensitive Committees of Parliament.”

Mr Mohammed said, “out of cowardice, the leadership of the NPP has given to such an irresponsible and reckless Member of Parliament, such a delicate position in Parliament.”

He said Mr Agyapong has become “like the ‘king kong’ within the NPP and virtually wants to be the ‘king kong’ of Ghana’s politics, he can say anything that nobody dares say and go scot-free.”

“So I’m saying that, that particular fear that has been demonstrated by people within the NPP and to a very large extent, a section of the Ghanaian media, they are so scared about him because perhaps they are so scared that he knows a lot about them.”

“I think that our democracy deserves better, and I think that we must begin to make him understand that this country, we have all agreed to chart the path of democracy and everybody’s conduct, including the President is regulated by law.”