NPP, NDC in contest of allegations as EC sweat over special voting 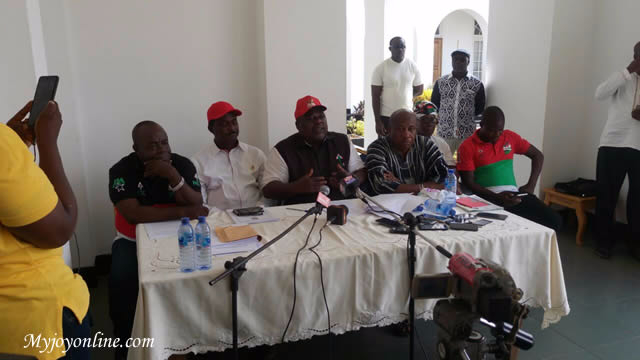 As if the challenges being faced by special voters in the ongoing early voting exercise is not enough, the two leading political parties are providing enough fodder for the contest of allegations.

Whilst the NDC is accusing the NPP of plotting to litter the streets with dead bodies to create panic in the country during election, a pro-NPP group, Let My Vote Count Alliance is also claiming to have intercepted a jute bag full of an officially stamped electoral materials from the vehicle of a constituency vice chairman of the NDC.

The NDC organised a press conference in the Central Region and was addressed by the Deputy General Secretary of the party Koku Anyidoho.

He claimed the party has uncovered a master plan by the opposition NPP to create chaos in the election part of which will be to fire gun shots in the Central Region on election day.

Anyidoho said the NPP has recruited well built men and procured fake electoral materials to raise doubt about the credibility of the election.

The motive will be to create constitutional crisis so they can benefit from a power sharing program, Anyidoho alleged.

He did not give any evidence, except a document he claimed was intercepted from their security sources.

The party has therefore forwarded the plot to the police for investigations, he said.

In Accra, the LMVCA was also hurling allegations against an unnamed NDC Vice chairman who it claimed had in his possession  official EC documents.

David Asante claimed the materials were intercepted from the van owned by the Vice NDC chair.

When he was asked to disclose the identity of the personality involved, he declined, except to say that his outfit was heading to the police to lodge an official complaint.

While tension rise over the contest of allegations, the political party leaders including the NDC's John Mahama and NPP's Nana Akufo-Addo have signed a peace accord and committed to peace at a program organised by several African leaders and election observers.

Myjoyonline.com cannot independently confirm any of the two allegations.