NPP reacts to criticisms about its planned hostels for “Kayayei” 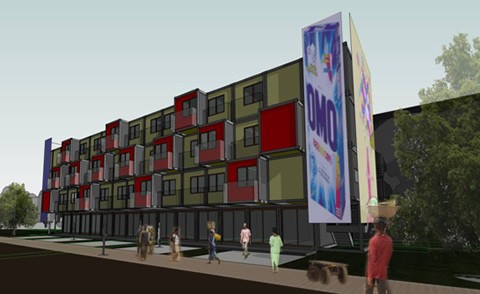 President John Mahama has recently described Nana Akufo-Addo’s promise of putting up hostel facilities for Kayayei (head porters) and other vulnerable young workers like street hawkers, “as the most insulting of all his promises”. Addressing a party rally at Savelugu in the Northern Region on Wed 31st October 2012, the President described the promise as a clear indication that the flagbearer of the NPP is very desperate to win power.

But, what is the President’s solution to the accommodation problem of this large and vulnerable group?

This is yet another evidence that the President has completely lost touch with the concerns and aspirations of the suffering masses of Ghana. At his IEA Evening Encounter he said the “quality of life” that Ghanaians are enjoying today is “unprecedented.” We wonder which Ghana he lives in.

Again, he says the issue with secondary education is not affordability, meaning parents have no problems paying fees.

Never has there been a Head of State (not even one forced on Ghanaians) who did not have a clue as to the real needs of the people of this country than this Caretaker President, John Mahama.

For him to say providing decent shelter for the growing numbers of kayayei and street hawkers is insulting is in itself insulting to the life sufferings of these vulnerable young citizens of Ghana, who are constantly abused and have to endure the hazards of sleeping unprotected on urban streets and pavements, and many of them with their babies.

The NPP believes that, this is not how a society must treat its vulnerable groups and we will proceed to fix it with both short and long term measures.

In John Mahama, Ghanaians have a president who believes social housing is travelling to Korea to sign a bad deal for the construction of expensive 200,000 houses at an average price of $50,000, which did not even happen. There has been nothing social about any housing policy directly promoted by John Mahama under this NDC III regime.

But, rather than revising his notes, he wants to do what he does best these days, misdirecting his attacks on every visionary social policy by Nana Akufo-Addo.

It is obvious that the President is either not well-informed about Nana Akufo-Addo’s policy on social housing or has deliberately chosen to ignore the details for political expediency and in doing so has only succeeded in exposing his unforgivable ignorance of the subject matter.

Nana Akufo-Addo in his speech to GREDA on 22nd October 2012, presented a detailed policy on housing (read full speech at www.akufoaddo2012.com) outlining specific interventions he intends to make in social and public housing in the next four years when elected.

Among others, the NPP Presidential Candidate said:

“We shall promote and institute the building of hostels for the most vulnerable, like the Kayayie, who currently sleep on the streets. These hostels will be run in conjunction with the skills training organisations so that residents will be obliged to undergo skills training and by the time they leave a hostel, they would be qualified to be independent. No one will stay in a hostel longer than a maximum of four years”.

Kayayie, like our street hawkers, unskilled labourers and others, are hardworking Ghanaians, trying to make a decent living for themselves in the mist of trying social and economic conditions. Our society is in danger of ignoring them. Rather than sleep on the streets and be homeless, they deserve like all citizens dignity and support.

In the 2012 NPP Manifesto, the NPP talks about developing social housing programs to address the housing needs of the marginal and vulnerable in society in line with Nana Akufo-Addo’s vision of building a free and fair society of opportunities and prosperity for every Ghanaian.

Our program is to build 100 social housing hostels in all regions of Ghana, providing 24,000 hostel beds at a cost of about GHC140 million over a four year period (2013-2016). These will be built in partnership with the private sector and the hostels will be run in conjunction with vocational, skills training organisations and other NGOs.

Shops will be provided on the ground floor which will be rented out at commercial rates to enable private sector partners re-coup part of their investment in the hostels. The hostels will be managed by a Housing Association on very disciplined and responsible rules.

Corporate bodies and charities will be encouraged to support and sponsor the skills training and counseling programs offered at the hostels and also advertise their brand on the buildings. Facilities will be provided for residents of the hostels for counseling, and vocational training, including, hairdressing, dressmaking, etc so that after a hard days work, the kayayei, will have the opportunity of learning some basic professional skills, basic literacy and numeracy and receive counseling in health and reproductive issues. What better way to do this than in well-organised and properly ran hostels.

The hostels are not going to be permanent abode for the tenants. It will serve as an interim system to offer them both accommodation and training opportunities after which they get a certificate and will be assisted to get a decent job with a decent pay. At the end of the period (not longer than 4 years) the Kayayei would have acquired the necessary skills to live an independent life and would be required to move out of the hostel.

How can the President, whose party claims to put “people first” come out against such a policy for the homeless. It shows the confusion in his mind.

This reinforces the broadly held view that the President is out of touch with the needs and challenges of ordinary Ghanaians. “Kayayei” are Ghanaians and deserve dignity and the hope of a better life like every other citizen. Vote out the NDC.

VOTE FOR THE NPP and let Nana Akufo Addo implement his idea of Social Housing Hostels for the vulnerable and marginal in our society.