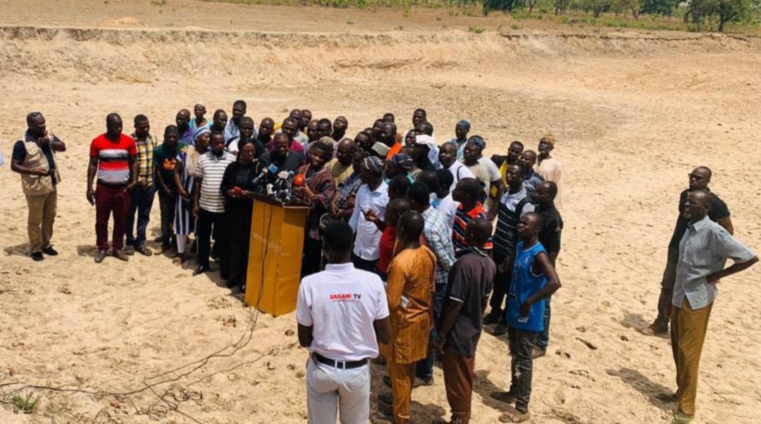 The National Democratic Congress (NDC) has described Akufo-Addo’s One Village One Dam (1V1D) projects as a trojan horse packaged to deceive electorates this year.

At a press conference Tuesday, the party said the government is deceiving residents of Nakpachei and Adibo both in the Yendi Constituency in the Northern Region about the true state of the dams it claims to have constructed as part of its 2016 manifesto promises.

“Indeed, we have always maintained that the One Village, One Dam promise is a trojan gift, deceptive in appearance, and insincerely packaged to hoodwink the good people of Northern Ghana for their votes.

“True to our words, the shoddy execution of these 1V1D projects has amply vindicated our long-held position that the whole talk about 1V1D by the candidate Akufo-Akufo-Addo was a ruse meant for electoral gain and nothing more,” National Communications Officer for the party, Sammy Gyamfi told the press.

Since the Minister for Special Development Initiatives, Hawa Koomson touted her sector’s achievement with the flagship program, several claims have been made by a section of the media that some residents of beneficiary communities are not satisfied with the quality of work on the dams being constructed in their respective areas.

The NDC in 2019 also asked government to make public the cost of their one village, one dam projects after accusing the governing party of ‘causing financial loss to the state’ with the ‘shoddy project.’

Reiterating this earlier stance, Mr Gyamfi who was addressing the media at the site of the proposed dam as part of the party’s ‘Moment of truth series’, noted that, the project in most constituencies have not been done due to provision of substandard excavators and shoddy execution of the work by contractors.

“We have brought you here today so that you who are the fourth estate of the realm will ascertain for yourselves, whether or not, the 1V1D project you are seeing here in Nakpachei in the Yendi Constituency even qualifies to be called a dam, let alone “a solution to the irrigation challenges of Northern Ghana” as deceptive President Akufo-Addo and his 419 government would have us believe.

“This dried-up 1V1D project that is before you is one of several excavated ponds and dugouts which have been branded as “dams” in the five regions of the North by President Akufo-Addo, ostensibly to spur dry season irrigation. We want you in the media to judge for yourselves, and the larger Ghanaian public, whether these dried-up excavated ponds are serving any useful agricultural purpose for farmers in northern Ghana who badly need water for their crops and livestock.”

While calling for the re-election of former President John Mahama, the outspoken Communications Officers said, Ghanaians in the northern part of the country will only enjoy a well-constructed dam when the New Patriotic Party (NPP) and its leader, President Akufo-Addo have been voted out in the 2020 December election.

“The only way the people of the north will see well-constructed small-scale irrigation dams again is for the John Mahama to be re-elected as President of the Republic of Ghana in the upcoming general elections. And we know without a shudder of doubt, that as the Lord liveth, the truth will surely triumph over lies and good over evil on December 7, 2020.

“We know that by the grace of God, the visionary, humble and trustworthy John Dramani Mahama will be given another mandate by Ghanaians to rescue our beloved country from the clutches of this deceptive, clueless, corrupt, wasteful and inept Akufo-Addo government and restore this country back on the path of truth, development and progress.”

DISCLAIMER: The Views, Comments, Opinions, Contributions and Statements made by Readers and Contributors on this platform do not necessarily represent the views or policy of Multimedia Group Limited.
Tags:
NDC
Sammy Gyamfi