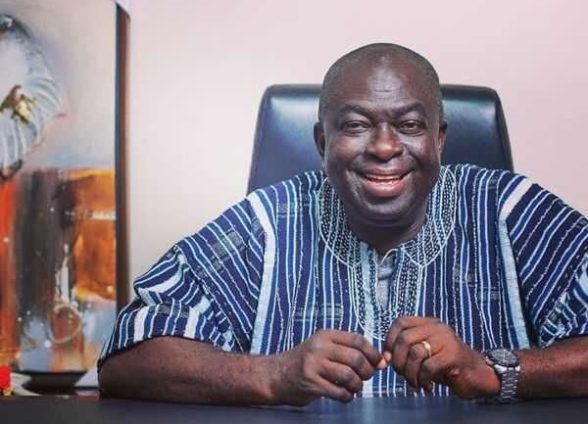 Aduomi allegedly made repulsive comments about the NPP

Former Deputy Minister of Roads and Highways, Kwabena Owusu Aduomi is in hot waters as he has incurred the wrath of some leading members of his party over what they described as ‘repulsive’ comments he made about the ruling party.

This follows a viral video on social media of the beleaguered politician surprisingly disowning his party (NPP), President Nana Addo Dankwa Akufo-Addo and his administration.

Mr Aduomi’s comments, where he openly scorned the NPP government has compelled a member of NPP Council of Elders in the Manhyia South Constituency, Richard Adjei Mensah Ofori-Atta aka ‘Tomtom’ to descend heavily on him.

According to Tomtom, who is a known entrepreneur and an outspoken politician, Owusu Aduomi has proven that he doesn’t have issues of the NPP government at heart, therefore, he should be treated with contempt, going forward.

Owusu Aduomi, during an interview that has gone viral, was asked if there were hardships in the country now and he answered in the affirmative, stressing that he knows a lot of people in his area, who have been hit by extreme hardship nowadays.

“Honestly, people have been complaining about extreme hardship in the country now, for instance, people have been frequenting my house to beg for alms. But for Kofi Job that I follow, I would have also suffered to even find something to eat,” Owusu Aduomi said.

Also, when asked about his views on President Akufo-Addo’s previous campaign message that Ghana was sitting on an abundance of wealth (money) yet there were hardships during the NDC administration, he surprisingly said he doesn’t share the same opinion of the President.

Sounding sarcastic, the former NPP MP for Ejisu, said “I did not say we are sitting on wealth (money) but we are suffering. If you see President Akufo-Addo then you ask him that question. He may have his reason for saying that so I cannot defend that for him”.

Again, when asked if the NPP government has managed the economy well, Owusu Aduomi retorted that he was an engineer and knows nothing about economics so he could not defend his own NPP government.  “I did not study economics in school so I cannot defend this economic issue”.

Predictably, Owusu Aduomi’s weird comments have incurred the wrath of Tomtom, who has called for punitive measures to be taken against the former Deputy Roads Minister for letting down his own NPP, to serve as a deterrent to other party members.

“Owusu Aduomi has committed a great sin against the NPP, a party that honoured him with an appointment as a Deputy Roads Minister, so he should be banned from defending the NPP both on radio and television without delay”, he angrily demanded.

Tomtom also said Owusu Aduomi, who is currently running for the Ashanti Regional NPP chairmanship position, by his weird comments, has shot himself in the foot as he (Aduomi) is not fit to lead the party in its strong fortress, the Ashanti Region.

“Owusu Aduomi has destroyed his campaign even before he officially announces his bid because no dyed-in-the-wool NPP member/delegate would cast his or her ballot for someone, who doesn’t love the party”, he argued and asked Aduomi to bow his head in shame.

Meanwhile, other equally angry NPP members in the Ashanti Region and other parts of the country, have also threatened to petition the party’s vetting committee to disqualify Owusu Aduomi from contesting for the NPP Ashanti Regional chairman position.

According to them, such a character could easily connive with NPP’s opponents to ensure the party’s defeat during crucial presidential and parliamentary elections, therefore he should not be allowed to contest for any sensitive position in the party.