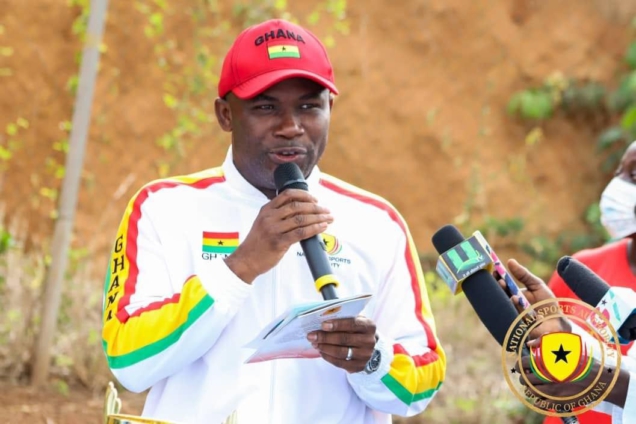 The Director General of the National Sports Authority, Professor Peter Twumasi, has been detained at the Legon Police station for alleged involvement in fraud, Joy Sports has gathered.

Prof Twumasi reported himself to the police on Friday following the detention of his Secretary, Afia Serebour on Thursday at the same police station.

Joy Sports’ Muftawu Nabila Abdulai was at the Police station and reports that the Director General’s secretary was detained after the Chief Executive Officer of a private company, Mum and Sons, reported her and Procurement Officer Ohene Twumasi of the NSA to the police for fraud.

His statement has been taken and he’s awaiting bail.

Mum and Sons reported the NSA, its Director General, Peter Twumasi, its Procurement Officer, Ohene Twumasi, alleged to be the cousin of the Director, and Secretary to the Director General, Afia Serebour early this month to the police after the authority’s failure to pay for 50 hampers her company provided to the NSA in January this year.

Per details picked up by Joy Sports, Mum and Sons was engaged to provide 50 new year hampers to the authority at a fee of GHC 500 per hamper, totaling GHC 25,000. However, there was no signed agreement between the two parties despite reported efforts from Mum and Sons for a signed agreement or receipt of work delivered.

Reports are that both and Ohene and Afia promised the NSA would make payment within two weeks “so there was need to sign any document.”

In May this year, five months after delivering the hampers, the NSA defaulted in payment forcing Mum and Sons to report the matter to the EOCO for investigations. The investigations by EOCO were not satisfactory to the complainant as she was reportedly told payment would be made to the company as and when the NSA has money.

The authority is reported to have later offered to pay GHC 10,000 instead of the agreed GHC 25,000 which was rejected by Mum and Sons.

In June, Mum and Sons was directed to see the accountant of the NSA for payment. It was during this period the company realised that Bobena Solutions, alleged to be the company of the Director General’s Secretary’s, Afia Serebour that was entered as the winner of the contract to provide the hampers at a cost of GHC 41,000 and not Mum and Sons.

Bobena Solutions had received GHC 15,000 part-payment. When Joy Sports contacted Afia Serebour in July this year, she cut the phone and directed us to speak to the Procurement Officer after the above details were revealed to her. Efforts to get the Procurement Officer proved futile as he rejected all phone calls that went through his phone.

Per Mum and Sons, they were advised to allow payment to be made to Bobena Solutions account so that they could receive the amount due them. However, payment was not made and an official complaint was filed before the Minister of Youth and Sports in September.

Prof Twumasi is reported to have told the Sports Minister, Mustapha Ussif that neither he nor the NSA has a contract with Mum and Solutions, forcing Mum and Sons to report the matter to the police to have them arrested for fraud.

Invitations were extended to the trio on Wednesday, but they failed to honour the invitation same day. The Secretary went to the station with her Lawyer on Thursday and was detained, while Prof Twumasi honoured the invite on Friday morning. He also went to the police station with his Lawyer.

The police had earlier secured a warrant from court for their arrest. Police told Joy Sports they are being processed for court, though there is an agreement for the money to be paid to complainant effective November 7.

DISCLAIMER: The Views, Comments, Opinions, Contributions and Statements made by Readers and Contributors on this platform do not necessarily represent the views or policy of Multimedia Group Limited.
Tags:
National Sports Authority
Prof Peter Twumasi