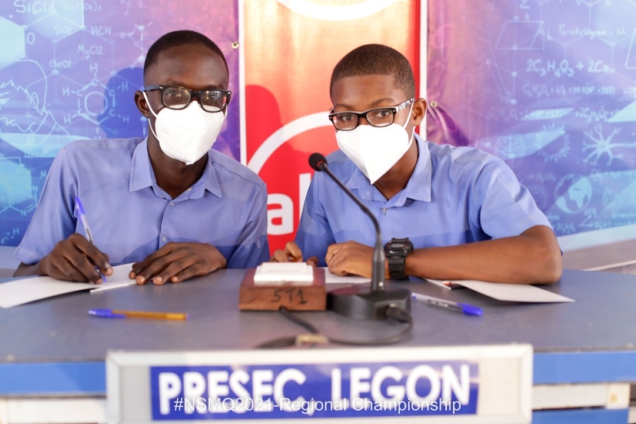 Reigning champions, PRESEC Legon has once again proven to be a great force to reckon with in the just-ended 2021 National Science and Maths Quiz (NSMQ) Greater Accra Regional contest.

The six-time winners on Thursday, brought its contending schools to their knees to earn the bragging rights as Greater Accra Regional Champions for the second time in a row.

It was a keen face-off involving PRESEC Legon, Achimota School, Chemu and Odorgonno SHS at the Accra College of Education.

With 23 points, PRESEC Legon took the lead on the scoreboard with Chemu SHS and Achimota School following closely with 20 and 19 points respectively at the end of Round One. Odorgonno SHS was at the bottom of the list with six points.

The second round of the contest was no herculean task for the Legon-based school as they garnered 11 more points to keep their lead.

With 47 points, PRESEC Legon still led the pack in Round Three. Both Achimota School and Chemu SHS earned seven more points to end up with 31 and 27 points on the score table.

Odorgonno SHS came headstrong in the third round and scored 20 points.

Achimota School in the last round of the contest gave PRESEC Legon a run for its money. But their efforts to surmount the reigning champions proved futile.

For the second time in a row, PRESEC, Legon have been crowned Regional Champions. Well done! 💙 #NSMQ2021 #AbsaRegionalChampionship #Primetime pic.twitter.com/Aqumrq4Qan

At the end of the day, PRESEC Legon with 47 points defended its title as Greater Accra Regional Champions to prove to its rivals; Achimota School, Chemu and Odorgonno SHS it still has what it takes to beat them.

The Odadie Boys were crowned Regional Champions last year and won its sixth trophy in the NSMQ contest. For some supporters of the school on social media, their victory paves way for a seventh trophy.