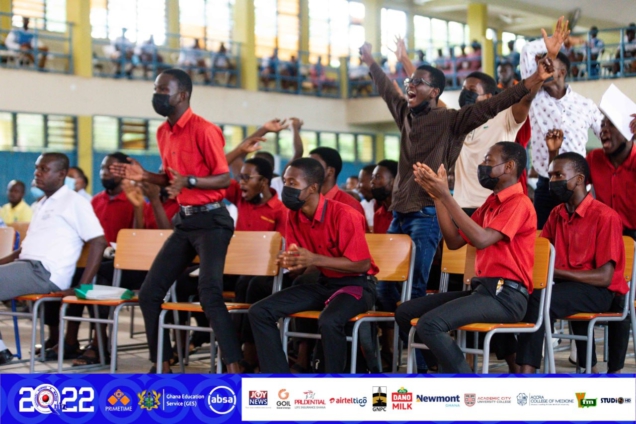 On Thursday, October 13, the final contests of the 2022 National Science and Maths Quiz preliminary stage came off.

On day four of the prelims, two schools tied for the highest points of the day. University Practice SHS and Abetifi Presby SHS both won their contest with 79 points.

They both also tied as the schools with the second-highest points in the preliminary contests. St Thomas Aquinas leads with 85 points.

The losing schools finished with 37 and 14 points respectively.

Aburi Presby SHS also put up an impressive fight in their contest. They secured a slot at the one-eighth stage with 64 points.

They competed with Nungua SHS and Atebubu SHS.

Mawuli School bagged a spot at the one-eighth. They competed against Fijai SHS and Boaamponsem SHS.

The Volta Region based school won the contest with 39 points. Fijai SHS followed closely with 35 points.

Winning their contest with 41 points, Krobo Girls is through to the next stage of the NSMQ competition.

The girls also won GHC800 in the Goil Riddle Bonanza and GHC2000 for the Prudential Life NSMQ star award.

Krobo Girls’ SHS won both the @GOIL_Official Riddle Bonanza and the @prulifegh NSMQ star in the second contest at the KNUST SHS Auditorium.

Also, competing at the one-eighth stage of the NSMQ competition is Tarkwa SHS.

Adventist SHS sailed through the preliminary stage to the one-eighth stage with 64 points.

They faced Kpando SHS and Al-Azhariya SHS in the contest. The two schools lost with 15 and 13 points respectively.

After failing to go further in the competition last year, Mfantsipim School returned to the NSMQ with hopes of beating the 2021 records.

For their first contest, the boys qualified for the one-eighth stage with 61 points. Their competitors West Africa SHS finished with 43 points while Sandema SHS only got 12 points.

Mfantispim in addition to their win, took home GHC800 for winning the Goil Riddle Bonanza.

For some of these schools who lost today’s contest and those who lost in the previous days, the prelims may not be the last NSMQ competition for them this year.

About 18 schools who had high marks but did not win, after a tally, will gain a chance to compete in the one-eighth stage.

The 2022 National Science and Maths Quiz is produced by Primetime Limited and sponsored by the Ghana Education Service in partnership with Absa Ghana. It is supported by GOIL, Prudential Life Insurance, AirtelTigo, Dano Milk, Newmont, Accra College of Medicine, Academic City University College and YFM.

DISCLAIMER: The Views, Comments, Opinions, Contributions and Statements made by Readers and Contributors on this platform do not necessarily represent the views or policy of Multimedia Group Limited.
Tags:
Mfantsipim School
NSMQ
NSMQ 2022
NSMQ 2022 prelims
NSMQ prelims