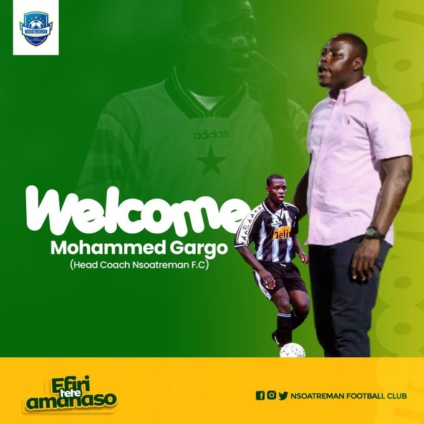 Gargo puts pen to paper on a three-year deal that will see him stay at the club until the end of the 2024/25 season.

Nsoatreman earned promotion to the top-flight after beating Tamale City in a Division One League Zone 1 playoff game at the Accra Sports Stadium under the tutelage of head coach Boniface Ayipah.

However, with Ayipah not possessing the needed coaching certificate to head a Premier League team, Gargo will take charge of the team when they play in the Ghanaian top flight with the former staying on as the assistant coach of the team.

Explaining the decision to appoint Gargo, the communications director of the club, Kofi Joel Gyempeh, said the forme Real Tamale United defender has the experience to help their development.

“[After promotion] we realised we had a vision and a mission to lead Nsoatreman Football Club to compete keenly in Ghana Premier League, win the trophy and for that matter compete in CAF competitions like the Champions League and the Confederations Cup,” he told Joy Sports.

“He [Mohammed Gargo] is a developmental coach who has the ability to develop players. We’ve seen how he developed players like Abdul Fatawu Issahaku, who has moved to Sporting Lisbon. He has also been a national team player and also played in the Italian Serie A and some Ghanaian clubs. So based on these credentials we realised he has the maturity to control the dressing room and lead us to the promised land.”

Joining the technical team for the 2022/23 season include former Asante Kotoko goalkeeper, Isaac Amoako and Nana Kwame, who will act as the team doctor.

The team also revealed the faces that will be behind their youth team for the season ahead.

DISCLAIMER: The Views, Comments, Opinions, Contributions and Statements made by Readers and Contributors on this platform do not necessarily represent the views or policy of Multimedia Group Limited.
Tags:
Boniface Ayipah
GPL
Kofi Joel Gyempeh
Mohammed Gargo
Nsoatreman