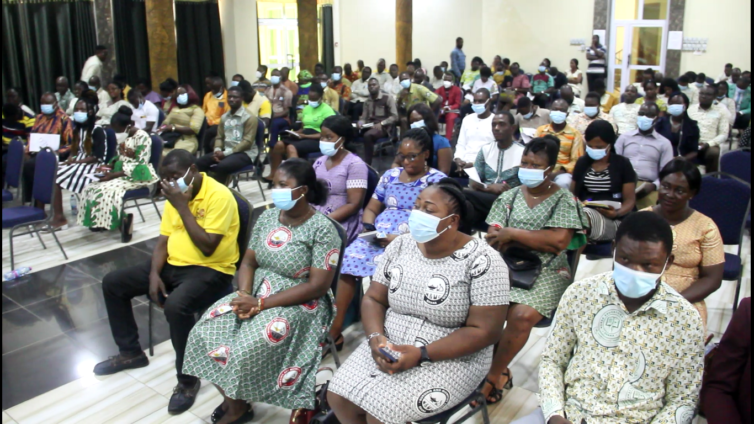 Some Nurse Educators during their 2022 Annual General Meeting held at Sunyani in June.

NEG, a specialised group of nurse educators, under the Ghana Registered Nurses and Midwives Association of Ghana (GRNMA) on August 9, 2022, rolled –out strike plans over low rates allowances for script marking, and care study, research, practical assessment, and other related matters.

They also alleged a lukewarm attitude towards their concerns by the health training institutions unit (HTIu) of the ministry of health.

But in a release signed by the National Chairman, Bakinam Adamu, and copied to stakeholders, including the sector minister, National Labor Commission, HTIu, GRNMA, and regional chairman persons of NEG, the group said their intended strike plans “has been suspended indefinitely with immediate effect”.

The suspension follows an amicable resolution of the issues in an emergency meeting with the Ministry of Health, GRNMA, and the Conference of Heads of Health Training Institutions (COHHETI).

The release, however, did not state which of their concerns have been successfully resolved.

Further information gathered indicates that the implementation of the resolved issues is expected to take immediate effect, while those unresolved would be resolved during the start of the academic year in December 2022, or else they would be left with no option but to advise themselves.

The group, therefore, hopes the outstanding issues would also be resolved through continuous dialogue with the relevant stakeholders, as agreed.

Below is a copy of the release announcing the suspension.

DISCLAIMER: The Views, Comments, Opinions, Contributions and Statements made by Readers and Contributors on this platform do not necessarily represent the views or policy of Multimedia Group Limited.
Tags:
Nurse Educators Group
Strike