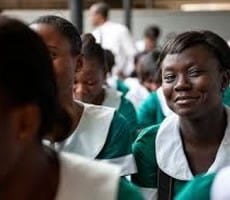 Health personnel at the Brong Ahafo Regional Hospital nurses' quarters have expressed fear, the facility may collapse on them any time soon.

According to them, the deteriorating nature of the facility, makes it uninhabitable with snakes taking over the quarters.

The health personnel using the facility said, even though several complaints have been lodged about the worsening situation of the nurses' quarters for the past 10 years, authorities have failed to address the daunting problem.

Speaking to Joy News' Brong Ahafo regional correspondent, Kuuku Abban, the health personnel said they are confronted with the presence of snakes in the facility.

The nurses are therefore upset with hospital authorities saying that in spite of the 10% monthly deductions made from their salaries as rent, the buildings they are occupying have been left to dreadfully deteriorate.

A visit to all the three blocks of the nurses quarters by Joy News, revealed a rickety septic tank, cracked-up bathroom tiles and leakages on the facility that accommodates a sizeable number of health workers.

In view of the nature of the facility, the occupants have accused authorities of the hospital of short-changing them, since their welfare had not been taken care of.

Reacting to the issue, Hospital Administrator, Abraham Asare Badiako, noted: "the 10% deductions is done at source and none comes to us. We therefore have no other option but to find money from elsewhere to refurbish the blocks".

Additionally, Mr. Asare Bediako pointed out that the construction of the septic tank has been earmarked for construction for which a contract letter had already been given out for a contractor to commence work.

The construction work is expected to commence in two weeks' time, the administrator indicated.