Obrafour is the Kinaata of his time, Lord Kenya is the GOAT – Joy FM Listeners eulogise 2 great highlife artistes 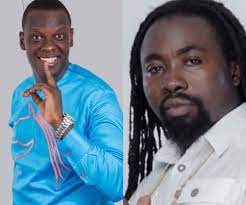 In the late 90s and early 2000s, Hiplife was a gift that kept on giving. The music genre birthed phenomenal artistes like Reggie Rockstone (who is known to be its originator though others disagree), VIP, Akyeame, E-Doe, Tic Tac, Lord Kenya, Obrafour, etc.

In the spirit of the Ghana month, Joy SMS on Friday, March 18, 2022, celebrated two of these great acts who made Ghana music what it is today – Obrafour and Lord Kenya.

The two burst onto the music scene almost at the same time.  Kenya began his professional music carrier with his first recording, ‘Car N’aba’ in 1998 and is noted for his affiliation with Slip Music. Obrafour also came to the limelight with the recording of his debut album, ‘Pae Mu Ka’ in 1999.

They may not be dominating the industry like before but their music is timeless. These undying tunes always get people on their feet dancing, singing rapping along as well as appreciating the talents whose words live on till today.

So for many of the listeners, especially those who grew up in that golden era, to choose between the two is a great challenge.

On Friday, listeners who phoned into the show explained why either of the two was their best pick.

The debate started with a thrilling rap freestyle from Civil Engineer, Engineer Abdulai Mahama who rooted for Lord Kenya and sang portions of his ‘Sika Baa’ song.

Actor Adjetey Anang also acknowledged that these are two great talents. Nonetheless, he rooted for Obrafour.

“Whenever you put Ghana’s rap sofo and Ghana’s rap heavyweight together you’re asking for trouble. I mean these guys have been responsible for some of the great music in the country; constructive, decent lyrics and full of wisdom to relate to,” he said. “But I think I’ll pick Obrafour [particularly] because of his relevance and consistency in the game.

One of the callers, Samuel rooted for Obrafour. To him, “Obrafour gave the best rap all the time.”

Yaw, who called from Gbawe also rooted for Obrafour. He described the ‘Yaanom’ hitmaker as “the Kinaata of our time.” He said in terms of lyrics, the depth of language, Obrafour is unmatched.

According to Millicent who called from Tema, Obrafour is timeless. “he has no competitor,” she added.

Other callers including Ama Dede, Francis, Mary who called from Achimota, Abu Mohammed who called from Juapong all rooted for Lord Kenya. Kwabena who also phoned in from Odumase Krobo was of the view that “Lord Kenya was the Greatest Of All Time (G.O.A.T).

Out of 17 calls, 9 went for Obrafour and 8 went for Lord Kenya. A Twitter poll was also conducted which crowned Obrafour as the best among the two. Most of the voters indicated that their choice was because of Obrafour’s consistency in the game.

Born Michael Elliot Kwabena Okyere Darko, Obrafour has contributed his quota to the growth of the Hiplife genre. He is noted for great songs such as ‘Odo’, ‘Yaanom’, ‘Ako’, ‘Hiplife’, ‘Kwame Nkrumah’, etc and has won a number of awards. Not only has he a unique style of Twi rapping and storytelling, he has also collaborated with other artistes in the Ghanaian music industry to make good music.

Obrafour is noted to have coined the popular term ‘Kasahare’ – the local name given to rap music in Ghana, which means ‘fast talk’ in the local parlance.

He went silent with his music career for a while but returned with the banger ‘Kasiebo’ which featured Guru. He has since collaborated with a few other artistes including Sarkodie to produce ‘Moesha’.

Lord Kenya was also born, Abraham Philip Akpor Kojo Kenya. Lord Kenya’s desire to become a professional really began to burn at the age of 17. In his prime, Lord Kenya’s music with the different shades of rap music and his skyrocketing energy levels earned him the name Ghana’s 2PAC.

Lord Kenya lived and acted as the rap lord during his days with his style and music. He is noted for hit songs such as ‘Sika Baa’, ‘Born Again’, ‘Baby Nayoka’, ‘Sika npo nfa ne ho’, etc., but retired from rap music and hip life in 2010 to win souls for Christ.

DISCLAIMER: The Views, Comments, Opinions, Contributions and Statements made by Readers and Contributors on this platform do not necessarily represent the views or policy of Multimedia Group Limited.
Tags:
Hiplife
Lord Kenya
Obrafour