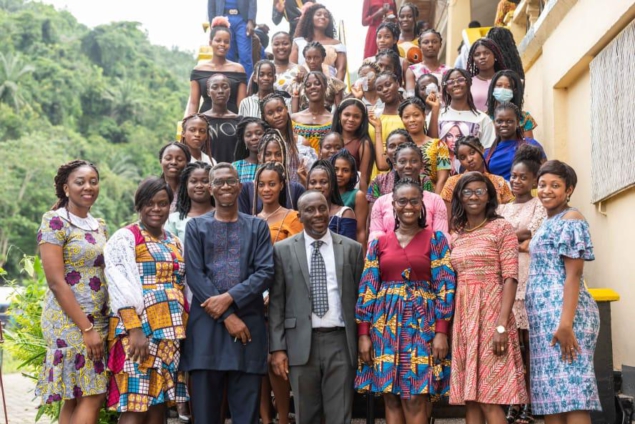 Obuasi-based All Feminine NGO, Self-Love Foundation, is backing ongoing calls for the government to scrap taxes on imported sanitary pads.

President of the NGO, Hillary Ekuoba Gyasi believes the removal will make them affordable to teenagers especially from less privileged homes and deprived communities.

She made this call on the sidelines of a relationship seminar organized by the Students Chaplaincy Council of the Kwame Nkrumah University of Science and Technology, Obuasi campus, where she was a Guest speaker.

It comes after the gender minister in a solidarity message on the commemoration of the 2021 Menstrual Hygiene Day stated her intent to accelerate the process to eliminate tax on sanitary pads.

Sanitary towels are not luxury items. But stakeholders say taxes levied on the products claws back on the gains that the country has made in promoting girl child education.

It also risks negating the achievement of Sustainable Development Goals.

Leadership of the association are worried menstruation is the major contributing factor to school absenteeism and poor academic performance among school girls.

On average, a girl will have 13 menstruation circles a year. Two pads may be used for a flow. This means that between 13 to 16 sanitary pads may be needed per year.

Officials of the Self-Love Foundation therefore donated about 1000 menstrual caps to students in the municipality.

CHALLENGES GIRLS FACE DURING MENSTRUATION
The Foundation observes that continuous challenge girls face to access accurate information on how to observe menstrual hygiene in addition to high cost of menstrual pads, as factors impeding adherence to menstrual hygiene.

She added “this is where Self Love Foundation comes in. At the moment we are partnering another NGO called ‘ Couldyou? to provide Menstrual caps; a small cup inserted in the woman to collect blood. These will be given out for free. The menstrual cup be used for the monthly menstrual cycle for a maximum of 10 years”.

Meanwhile, the association hopes to foster good relationships with the municipality to enable them to empower and educate more teenagers.

STIGMA ATTACHED TO MENSTRUATION
Vice President of Self Love Foundation who is a midwife of the AGA Health Foundation, Sally Osei Tieku, bemoaned the increasing rate of stigmatization against girls during menstruation periods.

Miss Tieku describing the situation as worrying, said the misconceptions surrounding menstruation have resulted in most women developing low self esteem.

She advised that men support women during menstruation.

“Now most girls absent themselves from school during the period of menstruation. This is because of the embarrassment and pain they go through during this period”.

Miss Tieku revealed that the NGO is working assiduously in educating girls on how to prepare for menstruation, how to go through menstrual hygiene and how to properly dispose off the waste.

He added, “if you are forced to marry or you force yourself to marry, you might not enjoy a successful marriage life because the love might not be there”.

Rev. Akwaa also attributed the disturbing situation which has negative consequences on children to lack of endurance and the fighting spirit on the part of couples to protect their marriage or relationship despite the odds.