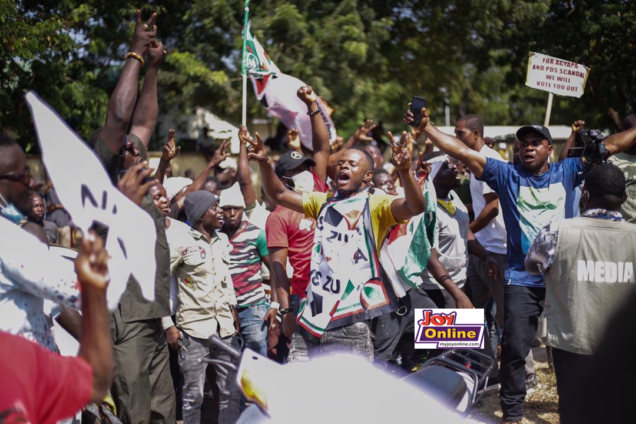 Supporters of the National Democratic Congress (NDC) in Cape Coast are in disbelieve at the Party’s loss in the 2020 Presidential election bid.

Seen in groups, they relished how a Mahama administration would have changed the country and alleged that the Party has been short changed.

“Everything is clear that Akufo-Addo and the New Patriotic Party (NPP) lost the elections but they have used all means to turn it into their favour,” said Hassan Mohammed, an NDC supporter.

He was of the opinion that once the Party had won the 2 seats in Cape Coast North and South, its Flagbearer, former President John Dramani Mahama had won the Presidential bid.

Another supporter, Nuredeen Ackon said the Party must go to Court to claim what was rightfully theirs.

Meanwhile, there was spontaneous jubilation in Abura, a suburb of Cape Coast, following the declaration of Nana Addo Dankwa Akufo-Addo as the President-elect of the 2020 general elections.

Dressed in party colours and displaying the flag of the NPP, the jubilant supporters strolled and danced on the street as they chanted “four more years for Nana to do more.”

In an interview with the Ghana News Agency (GNA), some citizens in the Metropolis expressed delight of the outcome of the results and craved for more development from the NPP government.

They congratulated the chairperson of the Electoral Commission for a good work done and admired her sense of courage and bravery when declaring the results.

They further applauded the Commission for strictly enforcing the safety protocols which enhanced the electoral process.

Some however, raised concerns about the delay in announcing the election results and said it caused tension and doubt among the populace.

Mr Kwesi Eduah, a carpenter, recommended that the closing time for election should be brought forward to 16:00hrs to give the EC time to process the results.

He urged all political parties to put their differences aside and support the President elect to promote peace and unity in the country.

Madam Ayisha Ahmed said she was not surprised about the outcome of the election because President Akufo-Addo had done so well in his first term and deserved another four years to continue with his flagship programmes particularly, the free SHS.