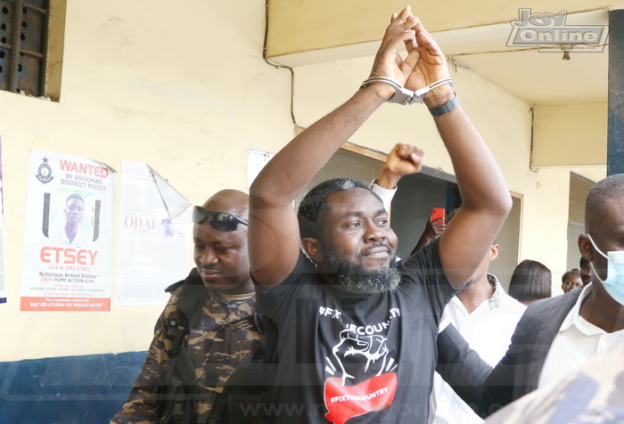 #FixTheCountry convener, Oliver Barker-Vormawor is likely to spend one more night in Police custody despite being granted bail.

Barker-Vormawor was granted bail to the tune of GH¢2 million on Wednesday morning with two sureties, one of whom should deposit documents to his landed property in execution of the bail.

He is also required to report to the Police once a week.

Meanwhile, Joy News has learnt that the Court Registry has to ascertain the authenticity of the documents of the property submitted to the Lands Commission as part of the requirements to meet the bail condition.

This means that the Police will hold him for one more night until the Court Registry confirms the authenticity of the documents.

Speaking on Top Story, Wednesday, one of the conveners, Felicity Nelson confirmed that “It is highly unlikely that he is going to be out or he is going to be released this evening… as we speak they are at the Court right now in Tema waiting for the Registrar to turn up.”

She believes that the delay in processing the bail forms part of the Police’s scheme to frustrate Oliver Barker-Vormawor.

“In the last thirty-three days, I wouldn’t be surprised that yes, it is definitely part of the agenda to frustrate the process,” she told Evans Mensah.

Earlier, hours after the bail was granted, members of the Movement said they could not locate the crime officers responsible for finalising his departure from Police detention.

“Oliver has been able to provide all the necessary things to meet his bail conditions… But unfortunately, the crime officer, they don’t know where he is. He is currently not here. He is the one supposed to go back to the Registrar of the Court and show that Oliver has been able to meet all the bail conditions and actually release him and he is nowhere to be found,” Madam Felicity Nelson explained.

She told JoyNews that all efforts to gain access to the crime officers have proven futile.

“The Police are deliberately frustrating the process. Hopefully, if we are able to locate the crime officer today, he will be released today. But if not, then we don’t know. It may be tomorrow or the day after that,” she said on Wednesday.

He posted, “If this E-Levy passes after this cake BS, I will do the coup myself. Useless Army!”

The activist is currently facing treason felony charges after he was initially charged with a misdemeanor offence conducive to the breach of peace.

DISCLAIMER: The Views, Comments, Opinions, Contributions and Statements made by Readers and Contributors on this platform do not necessarily represent the views or policy of Multimedia Group Limited.
Tags:
#FixTheCountry Movement
Bail
Barker-Vormawor
Crime Officer