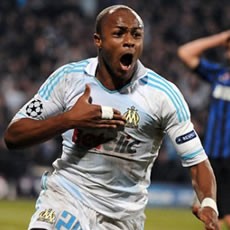 With an injured knee and shoulder, respectively, Andre Ayew and Mathieu Valbuena should be back to competition shortly. Their returns to action Will considerably bolster an OM side that is harboring big ambitions for the second half of the season.
Injured in Ghana's World Cup play-off against Egypt, André Ayew's last appearance for OM came in the Champions League Matchday 4 clash against Napoli on November 6, 2013. The Ghanaian Scored a header in that game. The goal couldn't prevent his side from going down 3-2 at the Stadio San Paolo.
Since then, Andre went under the knife. The operation to fix the exterior meniscus in left knee went smoothly. It's just a matter of time before the elder of the two brothers Ayew is back on the pitch at the Robert Louis-Dreyfus Training Centre. He will be ready for competition in early February if everything goes according to plan.
Mathieu Valbuena was injured in the 73rd minute of the Week 16 Ligue 1 clash against Lille on December 3. Diagnosis: a strained shoulder and collarbone. Missing: four to six weeks. It was a tough evening for the OM playmaker who had to watch on helplessly as his teammates were beaten 1-0 in the final seconds.
The France international is close to a return to the training track. Coach José Anigo confirmed: "Mathieu Valbuena Will not be ready for the match against Reims in the Coupe de France and Evian Thonon Gaillard in Ligue 1 . But he may he be ready for the match against Lyon in the League Cup on January. 15. "
Tags: