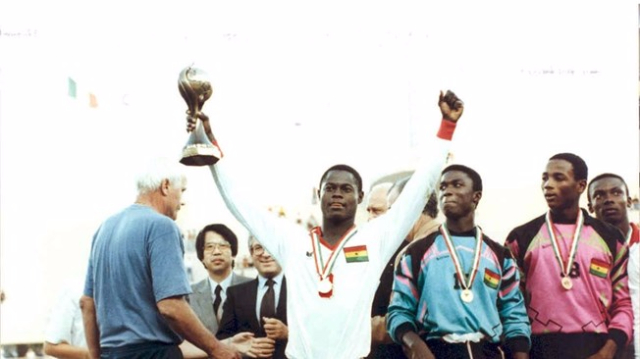 Champions:
Ghana's first-ever FIFA U-17 World Championship title was richly deserved. Able to call on just the right blend of individual talent and team spirit, the Ghanaians were never afraid to take the initiative and were ultimately rewarded for their enterprising approach. Expertly coached by master German tactician Otto Pfister, their made-to-measure 1-3-4-2 formation invariably had opponents on the back foot from the first whistle. If the team had a weak spot it was in attack, where they sometimes had trouble converting all their chances, but this could be explained by the fact that they had the youngest squad of all the sides in the competition, with an average age of just 16 years and 1 month. Top of the class for Ghana's youngsters were Kofi Mbeah, Mohammed Gargo, sweeper Isaac Asare, and ace marksman Nii Odartey Lamptey, who scored four goals.

Surprises:
This was a well-balanced tournament which saw a representative from four continents reach the semi-finals. Argentina were South America's envoy, Spain carried Europe's hopes, Ghana had all Africa behind them, while surprise-package Qatar were Asia's last chance. Qatar used their 1-3-5-1 formation to great effect, defending deeply then counter-attacking at speed. Coach José Roberto Àvila explained his team's tactics: "We have to make do with the resources at our disposal," he said. And make do they did, getting all the way to the last four, despite only scoring six times. Ahmed Al-Shafi and Ali Califa Al-Malki were the pick of the bunch for the pragmatic Qatari.

Player of the Tournament:
The adidas Golden Ball could only go to one of the members of the victorious Ghanaian side, and so it was, with Nii Odartey Lamptey taking home a very special souvenir from his Italian sojourn. Lamptey was the beating heart of a very good side. His fast feet, speed of thought, and clever interplay with captain Nana Alexander Opoku and fellow midfielders Mohammed Gargo and Emmanuel Duah were on display for all to see. His willingness to get into the box was critical too, and his four goals made him joint top -goalscorer.