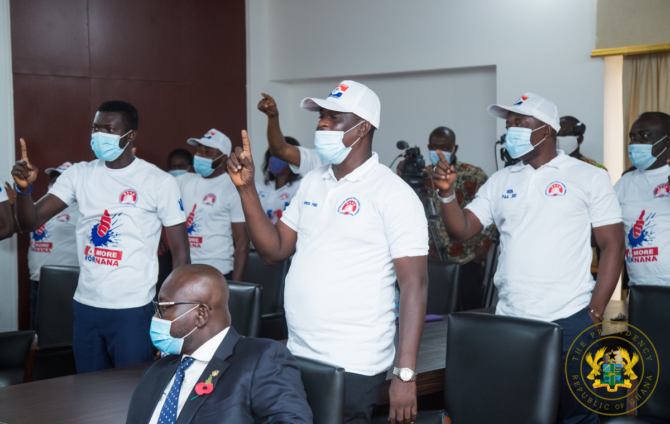 The Greater Accra Association of Assembly Members believes that the pledge to pay members a monthly salary can only be fulfilled by a government led by President Akufo-Addo.

Paying a courtesy call on the President on Tuesday, Stephen Kwasi Acquah, spokesperson for the Association, indicated that the promise to pay salaries to assembly members is a call in the right direction.

“However, in the 2012 and 2016 manifestoes of John Mahama and his NDC, the candidate who is today telling us he will pay us if he wins the 2020 election, the pledge to pay Assembly Members was made in those manifestoes,” the spokesperson said.

He continued, “He (John Mahama) reneged on the pledge he made to pay us when we voted for him in 2012, and that is why we did not vote for him again in 2016, even though he had repeated that pledge.”

Mr. Stephen Kwasi Acquah, on behalf of the Greater Accra Association, stated that “if there’s someone who we believe can pay Assembly Members on a monthly basis, then it has to be Nana Addo Dankwa Akufo-Addo.”

Outlining the policies implemented by the Akufo-Addo government from 2017 to date, the spokesperson of the Association indicated that the Free SHS, 1-District-1-Factory, the Nation Builders’ Corps, and the programme for Planting for Food and Jobs have proven to be extremely beneficial for them and the constituents they represented.

“Prior to the inception of Free SHS, we would always wake up to knocks on our doors by parents who could not afford to take their wards to school. The implementation of Free SHS has lifted the burden from us because of NABCO, no one harasses us for jobs anymore,” he added.

Thanking the President for making time to meet with them, Stephen Kwasi Acquah stressed that “we believe that if we support you, and ensure that you get four more years, our circumstances, as Assembly Members, will be better off under your government.”

On his part, President Akufo-Addo told the Members of the Association that “I like very much the commitment that has been made” towards ensuring that there would be no return to power of the NDC.

“The atmosphere in the country is good for us. The Ghanaian people are very happy with the work that has been done for them over the course of my first term in office, so help me take the message to every nook and cranny of the country. We cannot afford any complacency. The election is not won until the last vote has been counted, and we have to make sure that everyone who has registered comes out to vote,” President Akufo-Addo added.

DISCLAIMER: The Views, Comments, Opinions, Contributions and Statements made by Readers and Contributors on this platform do not necessarily represent the views or policy of Multimedia Group Limited.
Tags:
Akufo-Addo
Assembly Members