Operation Clean Your Frontage: Near clash between Police and traders at Circle 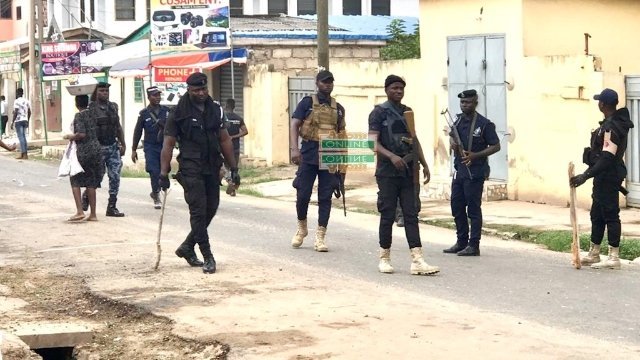 There was a near clash between the Police and traders at the Kwame Nkrumah Interchange in Accra on Tuesday during the enforcement of sanitation by-laws under Government’s “Operation Clean Your Frontage.”

Traders at “Maame Dokuno – VVIP” enclave protested their eviction by the “Operation Clean Your Frontage” campaign led by the Greater Accra Regional Minister, Mr. Henry Quartey, bringing the exercise to a halt momentarily.

A bulldozer, deployed to demolish some illegal structures had its windscreen smashed, compelling the driver to retreat.

The traders, mainly young males, looking visibly agitated, blocked the entrance to the area with wooden kiosks and anything they could lay their hands on to prevent access.

They chanted war songs and hooted at the Police and other members of the campaign team, with some heard saying: “We have families just like you, we cannot all work in offices.”

The Police, fired a warning shot to disperse the protesting youth, but they charged on, making the Police look on while they waited for the next line of action.

The Government last year launched the “Operation Clean Your Frontage” in Accra towards making the national capital the cleanest city in Africa.

Over 3,500 people have been deployed to implement sanitation by-laws under the initiative. The policy by the Greater Accra Regional Coordinating Council seeks to, among other objectives, make it obligatory for all individuals and corporate entities to be responsible for the cleaning and greening of their immediate surroundings.

The necessary by-laws have been passed and gazetted by the 29 Assemblies in the Region to enable the lawful implementation of the initiative.

All Assemblies in the Region are undertaking the exercise. At 6 pm hours, participants of the campaign converged at Independence Square to be deployed in busses to the various districts.