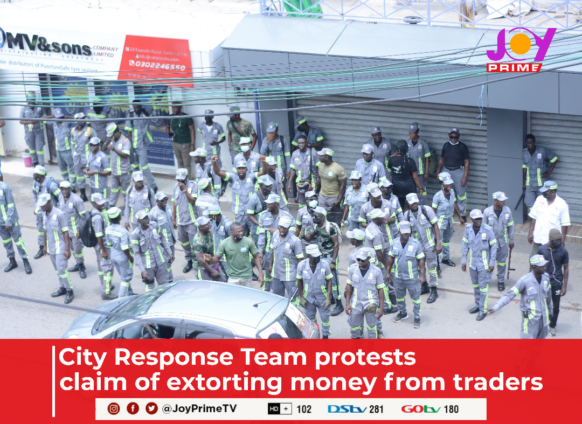 Personnel deployed to ensure the improvement in sanitation are already crying foul.

Some members of the Operation Clean Your Frontage taskforce in parts of the Greater Accra Region are contesting claims that they are perpetrating illegalities.

Scores of them who picketed The Multimedia Group raised concerns about purported attempts to undermine their hard work.

This occurred after the city response team undertook its latest Operation Clean Your Frontage exercise on Thursday.

After the exercise, hundreds of them trooped to the forecourt of the media company to express their frustrations.

Some of them told Myjoyonline.com that the allegations of extortion among others are affecting their morale.

“When we went out they were telling us that we are here to take bribes and other things and we told them that is not our issue here. Our enforcement is to work well and make our country work,” she said.

They are accusing some persons including Greater Accra Regional Youth Organiser of the New Patriotic Party (NPP), Moses Abor of courting disaffection for the taskforce.

“They are tarnishing our image,” the official added.

According to him, reports of abuse and extortion during the discharge of their duties will not be taken lightly.

He was speaking at a brief ceremony in Accra to deploy some 898 men and women as part of the Operation Clean Your Frontage initiative.

It is for this reason that the group insists they have committed to ridding the city of filth without harming or taking advantage of any trader.

One of them told JoyNews “our father told us that we shouldn’t go out there beating the people and insulting them.”

They are urging government to help dispel these accusations to provide a tranquil environment for them to work.

The taskforce is expected to clamp down on the indiscriminate disposal of waste across the city.

DISCLAIMER: The Views, Comments, Opinions, Contributions and Statements made by Readers and Contributors on this platform do not necessarily represent the views or policy of Multimedia Group Limited.
Tags:
Extortion
Operation Clean Your Frontage
Picket
Taskforce