Opinion: Rodney’s Potpourri: Scratching the ‘Scars of the revolution’ 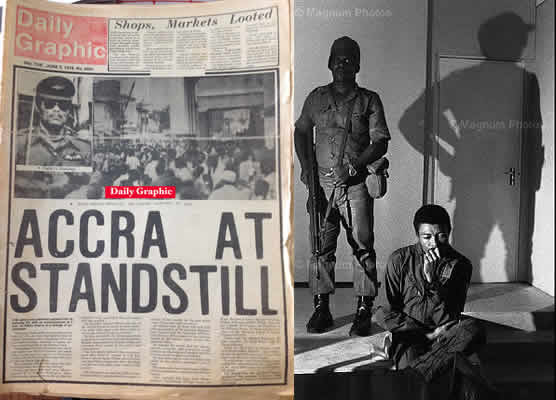 I have not been very well over the weekend so I was quite behind the news curve. But the story about the broadcasting of ‘Scars of the Revolution’, a documentary by Joy News on the June 4 revolution caught my eye, generating a storm of arguments about whether it was necessary at all and what purpose it sought to establish.

Like many of my generation, I experienced the June 4 revolution and its aftermath. I was just about 11 years old and my family lived in Prestea. I saw the whipping of women in the streets for daring to sell their items at ‘kalabule’ prices. I saw bloodthirsty soldiers on a rampage drunk on power and high on whatever illegal substances they had laid hands on. Those were scary times, and when the following year I entered secondary school and the same dormitory with the son of one of the executed generals, Air Vice Marshall G Y Boakye, the reality of the horrors of the previous year came back to me with brutality. I think my detest of military regimes and all that flow from it was crystallised at that age.

There are those who argue that the whole point of the Truth and Reconciliation Commission set up by former President Kufuor during his tenure was to allow people to vent and then draw a line and move on. I disagree, respectfully.  My position is that our history as a nation should not only be about the glorious parts and the wonderful heroes. The ugly bits-the scars- also deserve an outing, because that is how our history becomes balanced. I do not believe we are estopped from discussing June 4 from its several angles just because we had a truth and reconciliation exercise. Americans do not cease discussing the ugly side of their Civil War, the French do not stop talking about the guillotine and decapitation of Marie Antoinette,  and the Holocaust is still very relevant to the Jews. Many other examples abound. We cannot put June 4 or any of the other revolutions and pseudo revolutions in a box and wish them away, because they simply will not go away.

We do our history a great disservice if certain parts make us so uncomfortable and sensitive that we prefer to bury them and never talk about them. Apparently whilst the arguments raged on social media about the appropriateness of the documentary, someone asked on Facebook whether Kotoka was different from Utuka. That is sad, and even reinforces my point that our story as a nation, warts and all, must be told again and again and we must not tire of doing so. It is good that History of Ghana is being reintroduced into our school curriculum,  but we must go beyond that.

I do not know why Joy News decided to focus on June 4. Perhaps it was easier because many of the actors are still alive, which of course can also be said about December 31st. But I think there are so many scars in this country’s history that needs scratching and I hope Joy News or some other organisation will take it upon itself to educate us all further.  Even beyond the revolutions and coups, issues like Union Government as advocated by Acheampong, and its aftermath, deserve to be told.

Our history must not just be left in the textbooks. Thanks to YouTube, it is easier to disseminate documentaries. We have a huge responsibility to understand ourselves as a nation particularly by noting where we have come from and how far we have travelled.

I can imagine that with respect to June 4 and December 31st, because many of the perpetrators and victims of the horrors are still alive, stories about these two eras generate some rawness and that at some point in the future this shall no longer be the case. But that is not enough to shove them under the carpet and sit tight.

We have many ugly scars. Let us scratch them from time to time, not in retribution or to hurt anyone or whip ill-feeling against them, but as a constant reminder that never again should we permit ourselves to go down a certain path.