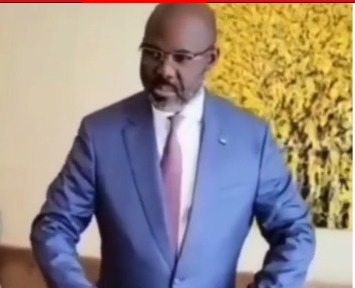 In recent times, a song by Nigerian artiste Oluwatobiloba Daniel Anidugbe, popularly known as ‘Kizz Daniel’ has been the toast of many music lovers.

The song ‘Buga’, which was released on the 4th of May, 2022, has warmed its way into the hearts of hundreds of partyers.

On Instagram, Tiktok and other social media platforms, ‘Buga’ has been trending as well; with many creating exciting dance videos out of it.

The latest to join the euphoria is the President of Liberia, George Manneh Oppong Weah.

The twenty-seconds dancing video of the West African leader has caught the fancy of many netizens who have subsequently expressed admiration for Oppong Weah.

According to some of them, it is a delight to see a President jumping into an exciting fray such as the buzz created around the song from the Nigerian hitmaker.

Others have also commended him for promoting the Nigerian artiste by his viral dance move.

Meanwhile, apart from the applause generated by the 55-year-old African leader, a host of other prominent personalities have also shown their dancing moves to the song.

DISCLAIMER: The Views, Comments, Opinions, Contributions and Statements made by Readers and Contributors on this platform do not necessarily represent the views or policy of Multimedia Group Limited.
Tags:
Buga
George Manneh Oppong Weah
Kizz Daniel
Liberia