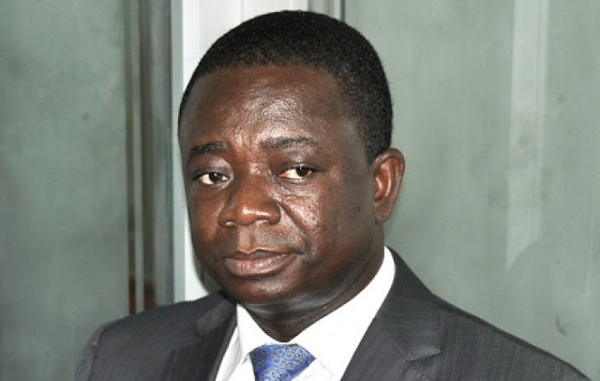 Dr. Felicia Ansah-Amprofi, the fourth prosecution witness in the case involving Dr. Stephen Opuni and two others said Agricult Ghana Limited only applied for a certificate to import and distribute Lithovit follar fertilizer into the country.

The witness said as explained to the court, the application for registration submitted by Agricult Ghana Limited was for certification to import and distribute fertilizer meant for food crops, not for Cocoa.

The Counsel asked the witness, whether per their records, there was any evidence to show that Agricult was registered to manufacture fertilizer but the witness answered in the negative.

Dr. Ansah-Amprofi explaining further said per their records, they were expecting to see lithovit powder fertilizer on the shelves in the market but what the inspectors saw on the shelves was different.

She said, “so my lord, whether it was imported or not it will be difficult for me to answer but per the records, we have an entity which cannot bring any fertilizer product into the country without a permit from the PPRSD.”
She said maybe the product might have been smuggled or manufactured in the country.

Mr. Nutsukpui asked the witness, whether there was any evidence in their records that indicated Mr. Agongo ever submitted any application for the registration of Lithovit follar fertilizer in his personal capacity, the witness said the application was submitted by the CEO of Agricult Ghana Limited.

“The CEO was the one, who signed the letter for the application for the registration,” she added.

The Counsel enquired that the PFRD, having been established by the Fertilizer Act meant that the Act provided the requirements and conditions for the registration of fertilizer and the witness answered in the affirmative.

She said the Fertilizer Act 803 and its regulations made provision on how to register fertilizer products.

Mr. Nutsukpui said, “You told the court that the duration for registration of all fertilizer products is two years and can be renewed for another two years, ”the witness answered in the affirmative.

He asked Dr. Ansah-Amprofi, whether there were any exemptions to the duration and renewal procedures either by the Fertilizer Act 803 or L.I 2194 and the witness said per the Acts and its regulations there were no exceptions.

The Counsel enquired from the witness whether persons or entities interested in dealing in fertilizer in respect of Cocoa must bring Cocoa Research Institute of Ghana (CRIG) Certification to PPRSD, the witness answered in the affirmative.

Asked, whether the requirement that the entities should furnish the PFRD with report and certificate from CRIG was a prescription of Act 803 or L.I 2194 and the witness said it was in the procedures and guidelines for registration.

She said it was so because, before Act 803, registration of product for Cocoa was being carried out by CRIG, because of the nature of Cocoa.
She said with the enactment of the Act, which superseded all registration of fertilizer products, a letter was written to CRIG, requesting CRIG to submit all results on product trials, so they could issue certification for Cocoa products.

She explained that CRIG was invited for a discussion on the certification of Cocoa products, there CRIG informed PPRSD Cocobod needed to put in a request for the trials.

Counsel ended his cross-examination of the fourth prosecution witness.
The trial is adjourned to October 14, 2020, for the prosecution to introduce its fifth witness

Dr. Opuni and Mr. Seidu Agongo are facing 27 charges, including defrauding by false pretenses, wilfully causing financial loss to the state, money laundering, corruption by a public officer, and contravention of the Public Procurement Act.

They have both pleaded not guilty to the charges and are on a GHS300,000.00 self-recognizance bail each.

DISCLAIMER: The Views, Comments, Opinions, Contributions and Statements made by Readers and Contributors on this platform do not necessarily represent the views or policy of Multimedia Group Limited.
Tags:
Opuni Trial